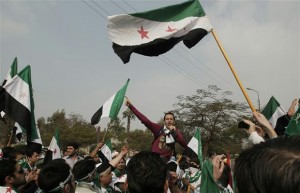 The Arab League on Thursday served a new ultimatum on Damascus, giving it less than 24 hours to allow monitors into the country or face sanctions, while for the first time calling on the United Nations to help resolve the crisis.

The ultimatum, issued at the end of a crisis meeting of Arab foreign ministers in Cairo, came amid an explosion of violence in Syria in which 32 people died, including 11 security force members and seven military pilots.

Long resistant to drawing the international community into the Syria crisis, the Arab top diplomats agreed to ask UN Secretary General Ban Ki-moon “to take all measures to support the efforts of the Arab League to resolve the critical situation in Syria.”

The Arab body’s chief, Nabil al-Arabi, said the 22-member bloc has invited Syria to sign an agreement in Cairo on Friday at 1:00pm that would allow observers into the country to monitor the situation on the ground.

Finance ministers will meet on Saturday to vote on sanctions should Syria fail to sign.

Sanctions, it said, would include suspending flights to Syria as well as freezing financial transactions with its central bank and commercial deals with the government except for basic goods.

The sanctions could also include freezing the financial assets of the Damascus government.

The United States and European Union have already imposed strict economic sanctions on Syria, where the United Nations estimates more than 3,500 people have been killed since March as the regime cracks down on a popular revolt.

Arab sanctions could sound the death knell for the country’s economy which depends on its Arab neighbours for half or its exports and a quarter of its imports.

“If that is to happen, it will be very unfortunate because the damage will be to all sides,” Economy Minister Mohammed Nidal al-Shaar told AFP in an exclusive interview.

On the ground, the violence claimed another 32 on Thursday, even as the Free Syrian Army called for foreign air strikes on in Syria to speed up the ouster of the regime.

Eleven members of Syria’s security forces and two deserters were killed in clashes in the flashpoint province of Homs, where at least 12 civilians also died, the Syrian Observatory for Human Rights said.

“Eleven soldiers and members of the security forces were killed in skirmishes” with deserters in the town of Huleh, the Britain-based group said.

The rights group said security forces killed at least 12 civilians around the province in central Syria, including three in the Bayyada area of the city of Homs.

The city of Rastan, also in Homs, was blasted with heavy machinegun fire after clashes between soldiers and deserters, two of whom were killed and 13 wounded, according to the Britain-based rights group.

Meanwhile, seven military pilots were killed when gunmen attacked their bus in the centre of the country on Thursday, opposition sources told AFP.

The attack, carried out by “armed Bedouins”, took place near the city of Palmyra, said an opposition member based in the flashpoint region of Homs.

The attack was claimed by the rebel Free Syrian Army, whose chief Riyadh al-Asaad on Thursday called for foreign air strikes on “strategic targets” in Syria to speed up the fall of the regime.

“We are not in favour of the entry of foreign troops as was the case in Iraq but we want the international community to give us logistical support,” FSA chief Colonel Asaad, who is based across the border in Turkey, told AFP.

“We also want international protection, the establishment of a no-fly zone, a buffer zone and strikes on certain strategic targets considered as crucial by the regime,” he said in a telephone interview.

The leader of the main Syrian opposition group in exile said after talks in Paris on Wednesday however that his organization does not want to see rebels launch armed attacks on President Bashar al-Assad’s forces.

Amid fears of the deadly anti-regime protests in Syria since mid-March turning into civil war, Burhan Ghaliun of the Syrian National Council said the FSA should try to avoid direct confrontation with regime troops.

“We would like this army to carry out defensive actions to protect those who have left the (regime’s) army and peaceful demonstrations, but not take on offensive actions against the army,” he said.

But Asaad said limited foreign intervention would “allow us to triumph in a relatively short time” and singled out missile batteries in coastal areas as prime targets for attack.

Photo: Pro-reform supporters, waving Syria’s pre-Baath old national flag, protest outside the Arab League headquarters in the Egyptian capital Cairo, where a ministerial meeting on Syria was held on November 24, 2011. Arab foreign ministers have invited Syria to sign an agreement by November 25 allowing observers into the country to monitor the situation on the ground, Arab League chief Nabil al-Arabi said.