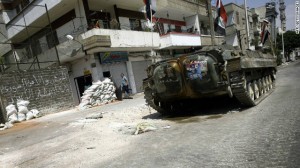 At least 11 Syrian military defectors were shot dead Thursday during clashes with regular Syrian army units on the western outskirts of the city of Homs, an activist group said.

Four other defectors were wounded in the violence, according to the London-based Syrian Observatory for Human Rights.

A campaign of raids and arrests is also taking place in the Damascus suburb of Domeir, Qalet Mudeeq in Hama, and Baniyas, the LCC said.

Funerals were held Thursday for 12 army, police and security forces personnel, the state-run Syrian Arab News Agency reported. The 12 had been targeted by “armed terrorist groups” while on duty in the Damascus, Homs and Hama areas, the news agency said.

The United Nations says more than 3,500 people have been killed in the government’s eight-month crackdown on pro-democracy protests.

Syrian President Bashar al-Assad has resisted mounting calls for his resignation in recent weeks as international outcry over the violence has intensified.

The Arab League last week suspended Syria from membership and demanded that the crackdown stop.

On Tuesday, the humanitarian committee of the U.N. General Assembly voted by a large majority to condemn the violence in Syria and express its support for the Arab League initiative.

It was the first resolution on Syria’s crackdown to be approved at the United Nations.

Protesters in Syria are demanding al-Assad’s ouster and democratic elections. He has been in power since 2000, following his father, Hafez, who ruled Syria for three decades.

Syria’s government has said it is fighting armed terrorists, and it maintains that the death toll is much lower than international observers and opposition groups say.