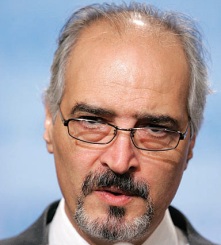 Syrian Ambassador Bashar Ja’afari was referring to a draft resolution on Syria which Germany submitted to the U.N. General Assembly’s human rights committee. The draft, which was crafted by Germany, Britain and France, has five Arab states among its 61 co-sponsors.

“This was tabled in the context of declaring a political and media and diplomatic war on my country,” Ja’afari told the committee, which is comprised of the 193 U.N. member states.

“It is a declaration of war that aims to affect the independence of our political decision-making and stop us from moving ahead in our national political agendas,” he said.

Syria has promised the United Nations that it would halt military operations against civilians and implement political reforms. But U.N. officials say Syrian President Bashar al-Assad has failed to keep any of his promises.

The draft resolution says the committee “strongly condemns the continued grave and systematic human rights violations by the Syrian authorities, such as arbitrary executions, excessive use of force and the persecution and killing of protesters and human rights defenders.”

It also condemns “arbitrary detention, enforced disappearances, torture and ill treatment of detainees, including children” and demands an immediate end to all such violations.

If adopted as expected, the resolution would urge Syria to implement an Arab League plan that called for it to halt military operations against civilians and to allow foreign observers into the country.

The committee is scheduled to vote on the draft resolution on Tuesday. If approved, the resolution will go to the General Assembly for a repeat vote in a plenary session next month.

“We hope that all (U.N.) member states will support this effort and send a strong signal to the Syrian Arab Republic that the ongoing human rights violations and violence must come to an end,” he told the committee.

In an interview with Reuters, Ja’afari had sharp words for the five Arab co-sponsors of the resolution, whom he dismissed as “lackeys.”

The Arab co-sponsors are Bahrain, Jordan, Morocco, Qatar and Saudi Arabia. Syria’s erstwhile ally Turkey, a predominantly Muslim country that has become increasingly critical of Damascus, is also co-sponsoring it.

“Since 1918, women can vote in Syria,” he said, apparently comparing his country with Saudi Arabia. “We have a parliament. Women can be physicians. Women can drive a car.”

He also accused Western powers of supplying the opposition with weapons and funds to attack government security forces.

The Arab League has threatened Syria with sanctions. If the league imposes sanctions on Damascus, Western diplomats on the U.N. Security Council have suggested that they would try to resurrect their efforts to impose U.N. sanctions on Syria.

Last month Russia and China vetoed a European-drafted resolution that would have condemned the crackdown, which has killed over 3,500 civilians since March according to U.N. figures, and threatened Syria with possible sanctions.

Western diplomats say European and U.S. officials are encouraging Russia and China not to block council action on Syria, but so far Moscow has signaled that it could not support U.N. moves against Damascus out of fear that it would escalate into a Libya-style military operation aimed at ousting Assad.