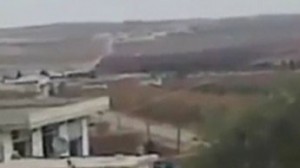 Syrian army defectors have launched a major attack on an intelligence complex on the edge of Damascus, activists claimed today.

Members of the Free Syrian Army fired shoulder-mounted rockets and machine guns at a large Air Force Intelligence complex situated on the northern edge of the capital at about 2.30am.

A gunfight ensued and helicopters circled the area, sources said. The attack appeared to mark an escalation in armed confrontations between government and opposition forces instead of clashes involving street protesters.

It is the first time a major security facility has been assaulted in the eight-month uprising against President Bashar al-Assad.

‘I heard several explosions, the sound of machinegun fire being exchanged,’ one resident, who lives in the suburb of Harasta, said.

There was no immediate report of casualties and the area where the fighting occurred remained inaccessible.

The attack came just day after dozens of soldiers and security forces loyal to President Assad were gunned down by a group of defectors in the southern province of Deera. At least 30 were killed after four hours of fighting.

But Turkish leaders have grown increasingly frustrated with Damascus over its refusal to halt the attacks on protesters.

Syria said it would boycott an Arab League meeting following the body’s decision to suspend Damascus from the organisation, as regional states stepped up efforts to isolate Assad for refusing to end the government repression of eight months of protests.

‘In light of statements by officials in Morocco, Syria has decided not to participate in the Arab meeting in Rabat,’ the agency said, without giving details.

An Arab official, who did not want to be named, said insurgent attacks on loyalist forces rose sharply in the last 10 days, although the army remains largely cohesive.

The meeting of Arab foreign ministers in Rabat on Wednesday comes four days after they decided to discipline Syria for pursuing the crackdown instead of implementing an Arab peace initiative.

The League has stopped short of calling for Assad’s departure or proposing any Libya-style military intervention.

Syrian forces killed at least six civilians on Tuesday, shooting from roadblocks in the northwestern province of Idlib and in raids on the central city of Homs and its environs, activists said.

Several deaths also were reported in fighting between army defectors and loyalist forces on both sides.

The Syrian Observatory for Human Rights said the bodies of three young activists who were killed in custody were delivered to their families on Tuesday, including 23-year-old Osama al-Sheikh Youssef.

‘The family collected the body from Tishreen Military Hospital on the condition of a quiet burial. Security police in plainclothes stood on top of Osama watching as we lowered him into the ground,’ an activist who attended the funeral said.

Syrian authorities have banned most independent media. They blame the unrest on ‘armed terrorist gangs’ and foreign-backed militants whom they say have killed 1,100 soldiers and police. The United Nations say the crackdown has killed 3,500 people.

With armed resistance mounting against Assad’s rule, alongside mostly peaceful protests, hundreds of Syrians have been killed this month in one of the bloodiest periods of the revolt, inspired by uprisings which have overthrown leaders in Tunisia, Egypt and Libya.

Tank bombardment continued overnight on Bab Amro, an area of Homs that has seen regular protests against Assad and where army deserters have been fighting loyalist forces, witnesses said.

‘The tanks were firing according to instructions they were receiving from snipers stationed on rooftops,’ a retired army officer in his 50s, who had fled the district, said.

Human rights campaigners say tens of thousands of Syrians have been detained since street protests against Assad’s repressive rule erupted in March.

The Arab League, stung into action by months of bloodshed in Syria, met opponents of Assad on Tuesday, a day after violence in his country killed 69 more people. In a rare move among Arab leaders, Jordan’s King Abdullah said earlier this week that Assad should step down in the best interests of the country.

A Saudi prince said Assad’s ‘lack of response’ to efforts to end the violence has made his departure inevitable, predicting that opposition to him will mount.

‘I think it is inevitable that he will have to step down in one form or another,’ Prince Turki al-Faisal, the former chief of Saudi intelligence, said in Washington.

Unlike more homogeneous Arab countries, Syria is a majority Muslim country ruled by an elite from Assad’s Alawite sect, an offshoot of Shi’ite Islam who dominate the state, the military and the security apparatus underpinning the power structure.

The country of 20 million has one million ethnic Kurds and an established Christian minority, as well as Alawites, Druze, and Ismailis.

Wary of repercussions if Assad were to fall, and taking into account Syria’s geopolitical position at the faultlines of Middle East conflicts, Arab officials have been hesitant to criticise Assad directly or call for fundamental political change in Syria.

The League, however, voted to suspend Syria’s membership from Wednesday, and asked Syrian opposition groups to draw up plans for a transition of power, as a prelude to a wider gathering on Syria’s future planned by the Cairo-based body.

Arab ostracism is a particularly bitter blow for Assad, who has always seen himself as a champion of Arab unity. Damascus says it is committed to the Arab peace initiative, which calls for a cease-fire and dialogue with the opposition.

The United States hoped the League would use Wednesday’s meeting to send a ‘forceful message to Assad that he needs to allow for a democratic transition to take place and end the violence against his own people,’ State Department spokesman Mark Toner said.

UN Secretary-General Ban Ki-moon said: ‘President Bashar should stop immediately the killing of his own people.’

Russia, one of Syria’s last few foreign friends, hosted talks with the Syrian National Council and urged it to hold a dialogue with Assad’s government. The opposition group responded by pressing Moscow to join calls for the Syrian leader to quit.

Russia joined China last month to block a UN Security Council resolution that would have condemned Assad’s crackdown, and has accused the West of discouraging dialogue in Syria.

A string of attacks on Syrian security forces in recent weeks has put the spotlight on the Free Syrian Army (FSA), a group of army deserters said to have been formed by a defecting colonel, Riyad al-Asad, in late July.

The FSA’s actions have prompted other players in the uprising against President Bashar al-Assad’s government to warn against a slide towards civil war.

What are the FSA’s aims?

In its founding statement, the group said it wanted to “work hand in hand with the people to achieve freedom and dignity, topple the regime, protect the revolution and the country’s resources and stand up to the irresponsible military machine which is protecting the regime”.

On 14 October, Col Asad told pan-Arab Al Jazeera TV that the FSA would “continue to offer its men’s blood and souls to help our great people get rid of the yoke of that ruling clique”.

How big is it?

The strength of the FSA is unknown. The group itself has put its membership at more than 15,000 by mid-October.

However, it has also conceded that it would be unable to directly confront the Syrian army, which is estimated to comprise over 200,000 soldiers. According to the FSA, soldiers and officers are defecting every day and are being organised and assigned tasks by the group.

Where is it based?

The FSA controls no territory in Syria. According to media reports, Col Asad and dozens of other FSA members are staying in a refugee camp in Turkey’s border province of Hatay.

Ankara has denied that it is harbouring people who are using military means against Syria. It has, however, admitted that it is difficult to know who is who in the camps it runs for people escaping from Syria.

How does it operate?

On 14 October, Col Asad said soldiers defecting from the Syrian army operated in their original areas using light arms. The FSA prevented the army from entering some villages and killed many members of the security forces, it said.

On 19 October, another leading FSA member, Col Malik al-Kurdi, told pan-Arab Al-Arabiyah TV that the FSA aimed to protect civilians by launching operations against military units that have attacked or are planning to attack protesters. The FSA was engaging in guerrilla warfare through attack and retreat operations.

In the last two weeks of October, dozens of Syrian soldiers and security agents were reported to have been killed by suspected defectors in the provinces of Homs, Hama and Idlib in central and northwest Syria. These incidents included a roadside bomb explosion, a rocket attack and a bus ambush as well as unspecified clashes.

What is its position on foreign intervention?

On 8 October, Col Asad told the Turkish newspaper Hurriyet Daily News that the FSA could achieve its aims “if the international community helps us” but that the task would be more difficult without arms.

He also called for a UN-imposed no-fly zone over some of Syria but rejected any military intervention against his country.

How is it viewed by other opposition groups?

The Syrian National Council (SNC), a coalition of opposition groups sharing the goal of overthrowing the government, has expressed some sympathy with the FSA while warning it against undermining the peaceful nature of the uprising.

On 27 October, SNC acting chairman Burhan Ghalioun told Al Jazeera TV that the FSA had become a force which could not be ignored. It should, however, limit its activities to defending unarmed civilians, he said.

Mr Ghalioun warned against any form of civil war, arguing that the success of the uprising depended on its continuation as a peaceful revolution.

He contradicted Col Asad’s claim on Al Jazeera TV on 14 October that there was “full coordination” between the FSA and the SNC. Contacts between the two groups had “barely started”, Mr Ghalyun said.