Clash on the air on MTV between Allouch and Sheker 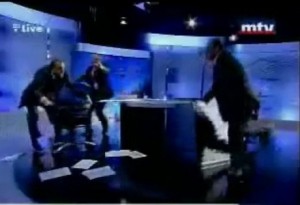 “Al Mawdouiya” program ( objectivity) which is moderated by TV Anchor Walid Abboud was abruptly stopped when Sheker threw a cup of water at Dr. Allouch , cursed him for saying that he does not believe Syrian president Bashar Al Assad.

Abboud physically intervened and prevented Sheker from reaching Allouch who tried to grab a chair to hit Sheker.

The program then went off air before resuming around 20 minutes later, with the two rivals returning to their seats .

The debate was about the crisis in Syria

The Baath party in Lebanon is the same party that has been running the Syrian government for 42 years.

Click on this link to watch the fight You Tube