by yalibnan
510
By Robert Fisk The suspension is a serious challenge to President Bashar al-Assad. He and his father Hafez promoted Syria as the "Mother of the Arab Nation" – now the "Arab Nation" wants to humiliate it.
Share: 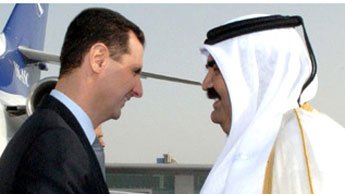 So did the “Arab Spring” infect the Arab League this weekend – or was it leaned on by the British Empire-style ambitions of tiny, rich Qatar?

The League – one of the silliest, most impotent, preposterous organisations in the history of the Arab world – has suddenly turned from mouse to lion and roared that Syria will be suspended from membership on Wednesday if it does not end violence against protesters, withdraw armour from cities, free political prisoners and start talking to the opposition.

Back roared Damascus: that Syria had already implemented the League’s peace plan – a dodgy statement – that the decision was “illegal and a violation of the League’s charter” (possibly true) and that Syria’s potential suspension was an attempt to “provoke foreign intervention in Syria, as it did in Libya”.

But the vote was pretty grim for the Assad regime. Of 22 states, only one abstained – Shia Iraq, for which thank you very much George W Bush – and two voted against: Yemen (of course) and Lebanon, which still lies in the sisterly embrace of Syria.

Qatar, which is Syria’s current nemesis – along with the Al-Jazeera satellite channel – was behind the vote, cajoling, pleading and, so they say, paying out large amounts of gas profits to those who might have second thoughts.

Qatar’s power in the Arab world is beginning to look distinctly imperial. With its money and its own air raids, it helped to bring down the Gaddafi regime. Now it is the League’s vanguard against Syria.

There won’t be a Nato no-fly zone over Syria. The Israelis would quite like to keep the Assad regime, on the grounds no-one knows who would come next. Iran would doubtless ask the Lebanese Hezbollah to bombard northern Israel if Nato attacked Syria. The Iranians themselves might get up to mischief with the US fleet in the Gulf. And not a single Arab wants a Libyan-type civil war to burn up Syria. Besides, Leon Panetta, the CIA chief, has already ruled out US firepower.

Nonetheless,it is a serious challenge to President Bashar al-Assad. He and his father Hafez promoted Syria as the “Mother of the Arab Nation” – now the “Arab Nation” wants to humiliate it.

The threat of economic and political measures is a real worry to a nation whose economy is already wearing at the edges after US and EU sanctions.