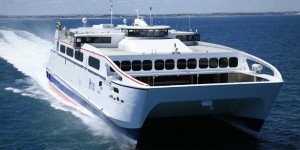 As many as five suspected Kurdish militants, reportedly armed with explosives, held about 20 people hostage on a passenger ferry near Istanbul on Saturday having hijacked the vessel soon after it set out in northwest Turkey early on Friday evening.

Turkish commandos on coastguard vessels tracked the high-speed “sea bus” in the Sea of Marmara before it ran low on fuel and had to anchor west of Istanbul. The ferry had been on a short run between the towns of Izmit and Karamursel.

Friends and relatives waited for news at the two ports, while fuel tankers headed for the area where the vessel was anchored, media reports said.

“They have no concrete demands. All they want now is fuel and food and drink,” transport minister Binali Yildirim told reporters in the capital Ankara. There were no indications that any passengers had been harmed, he said.

Shortly before 5 a.m. (0300 GMT) a flurry of activity was evident on the ferry’s main deck. Hazy television pictures showed figures moving in the aisle between rows of empty seats. A few people were apparently wearing life jackets.

Ambulances and police teams were waiting on the nearby shore, media reports said.

“There is information that they are from a wing of the terror organisation,” Yildirim said, referring to the militant Kurdistan Workers Party (PKK) which is fighting for Kurdish autonomy in the southeast of the country.

A hijacking would represent a change in tactics for the PKK which frequently carries out attacks on security forces in the mainly Kurdish southeast. Kurdish, leftist and Islamic militants are all active in Turkey.

More than 40,000 people have been killed in the PKK insurgency since the group took up arms in 1984.

The ship’s captain told the Haberturk news channel the assailants were armed and there were explosives on board.

“I am not going to give many details. We set off from Izmit. The ship’s crew and passengers were taken hostage by the HPG,” he said referring to the abbreviation used to describe the armed wing of the PKK.

Asked if the assailants were carrying guns, the captain said: “Yes, there are also explosives on board.”

He said the militants had asked him to speak to the channel but when asked whether the hijackers had any demands, the phone line was cut. During the broadcast at least one male voice could be heard in the background.

The “Kartepe” ferry was carrying 18 passengers, five of them women, and six crew members when it was hijacked soon after setting off around 5.45 pm (1545 GMT) on Friday.

The ferry was a couple of kilometres off the coast near Selimpasa, a small town about 50 km (30 miles) west of Istanbul, Yildirim said. Television pictures showed the vessel illuminated off shore in the darkness but no people could be seen.

Some reports said the hijackers had overpowered the captain of the ferry and seized passengers’ mobile phones.

Security forces were prepared for the possibility that the hijackers may want to take the vessel to Imrali island in the Sea of Marmara, where PKK leader Abdullah Ocalan has been jailed since 1999, CNN Turk reported.

There is a five-mile exclusion zone around Imrali and about 1,000 soldiers are stationed there, media reports said.

“Don’t intervene. I have a bomb. I will detonate it,” CNN Turk reported a hijacker as telling security forces by phone.

Yildirim said the ferry had zig-zagged its way across the Marmara Sea. Three coastguards and a helicopter were following the 400-passenger capacity ferry.

PKK guerrillas have staged a series of attacks on Turkish armed forces this year and killed 24 soldiers in an attack in Hakkari, bordering Iraq, last month.

That attack triggered cross-border operations by the Turkish military against the militants. Several thousand PKK fighters are based in the mountains of northern Iraq, from where they launch attacks on security forces in southeast Turkey.

The last two decades have seen a series of aircraft hijackings but they have been rare in recent years and hijackings at sea are even rarer.

In January 1996, pro-Chechen gunmen hijacked a Black Sea ferry with 200 passengers on board and threatened to blow it up in protest at a Russian attack on Chechen separatists. Those hijackers surrendered three days later