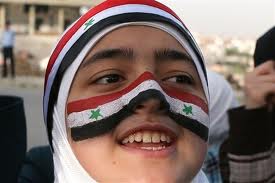 Thousands of Syrians took to the streets of their country Friday, calling on the Arab League to suspend the Syria government’s membership because of the armed crackdown on the eight-month-old political uprising, which they say has violated an initiative brokered by the league to end the violence.

In another grim day in what has become one of the bloodiest periods of the uprising, rights activists said that at least 18 people, including a defecting soldier, were shot dead by security forces across Syria on Friday, 11 of them in the restive city of Homs. Four were also killed in the southern city of Dara’a and two in Hama, in central Syria. One person was killed in the northwestern province of Idlib.

As in past days, Homs, a city north of Damascus activists have nicknamed the capital of revolution, saw the most strife. For more than a week, Syrian military and security forces have besieged the most restive neighborhoods. Residents there reported clashes in several locales, especially Baba Amr, where army defectors have sought refuge.

Residents said other streets of Homs, Syria’s third-largest city, were empty and that soldiers were ordering residents who dared venture outside back indoors.

“My mother hasn’t left the house in three days,” a woman who gave her name as Um Janti said of her mother, who is in her 80s. “She wanted to walk outside and see sunlight.”

Residents of Homs also reported that security forces and soldiers were looting in the city, especially houses belonging to people who had fled the crackdown and fighting. Um Kamal, a housewife from Homs, said that her house and a relative’s were plundered while they were away. “They took clothes and bottle of whisky, and then they went to my brother-in-law’s house upstairs, and they ate, used the bathrooms and the bedrooms, left them all messed up, and they left the bathrooms so dirty,” she said.

Both residents were reached by phone. The Syrian government has barred most journalists from entering the country, making it impossible to verify the reports.

The Syrian government announced on Nov 2. that it had agreed to an Arab League-sponsored peace deal to end the political violence that has rocked the country, deepened sectarian divisions and pushed the country to the brink of civil strife.

Under the deal, the government of President Bashar al-Assad promised to withdraw all security forces and military vehicles from the streets and stop killing protesters. But since the plan was announced, activists said that at least 104 people had been killed. The toll makes the period one of the deadliest in the Syrian uprising, which the United Nations says has left more than 3,500 people dead. Tens of thousands are believed to have been arrested.

“Has the Arab League initiative stopped our blood from flowing?” read one protest banner in a district near Homs on Friday.

The Syrian government has insisted that it is adhering to the Arab League initiative, pointing to the release of about 550 prisoners and offering an amnesty to people bearing arms. Foreign Minister Walid al-Moualem reiterated the point Thursday.

Although the Arab League has no practical powers, Syrian officials seem worried about the implications of appearing to defy the organization, one of the last interlocutors for a government that is growing more isolated.

From the beginning of the uprising, Syria has contended that it is facing an armed insurrection by militant Islamists, financed from abroad, who have killed more than 1,100 soldiers and security forces. Syrian rights activists have denounced the government’s description as a lie. But there is no dispute that armed elements in places like Homs have taken on a greater role in a revolt that was overwhelmingly peaceful in its early days.

The Arab League has scheduled an emergency meeting for Saturday, and diplomats said that they would begin discussing the suspension of Syria’s membership and imposing economic sanctions against it. The moves would have little effect, at least immediately, but would serve as a symbolic blow to a Syrian government that has long prided itself on being an axis of Arab politics and a proponent of Arab unity.

Eiad Shurbaji, an opposition figure reached in Damascus by phone, expressed skepticism that Syria would respond sincerely to any new Arab League pressure. “Is it suspending Syria’s membership that is going to achieve that?” he said. “I don’t know. So far, nothing has worked.”

Qatar seemed most aggressive in pushing for such a move, but opposition comes from various quarters. Saudi Arabia, the most authoritarian and conservative country in the Arab world, appeared more cautions, as did Algeria, Egypt, Yemen and others, who feared such a move could provide momentum to the tumult in the region.

This week, two leading rights organizations — Human Rights Watch, in New York, and Amnesty International, in London — called on the Arab League to support the referral of Syria to the International Criminal Court for committing what they described as crimes against humanity during the crackdown, among the most violent of the Arab Spring revolts this year.

Meanwhile, a Lebanese man was wounded after stepping on a land mine planted by Syrian troops along the Lebanese-Syrian border to prevent people from fleeing the carnage and to stop smugglers, the Lebanese police said.