Nasrallah rules out likelihood of a war with Israel 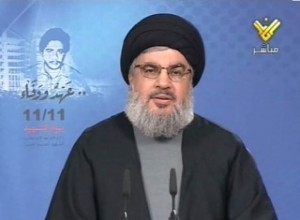 Hezbollah Secretary General Sayyed Hassan Nasrallah on Friday warned during a televised speech via video link that a war against Iran and Syria will spread to the entire Middle East but ruled out the likelihood of an Israeli offensive on Lebanon happening in the near future.

West’s “war on Iran and Syria will not be confined to these two states but will spread to other countries in the region.”

“Unless there is a plan for waging war on the entire region, we rule out the possibility of a close [Israeli] aggression on Lebanon,” Nasrallah said in his televised speech commemorating Hezbollah’s Martyr Day

“This is the first time that Lebanon and its south feel safe and confident because of the presence of the Resistance,” Nasrallah boasted.

“All the (recent) speculations and analyses about a possible Israeli war on Lebanon are aimed at intimidation. We rule out this possibility, not because Israel, the U.S. and the international community are generous, but because of a very simple reason: Lebanon is not weak anymore,” he reassured.

Addressing the issue of Hezbollah controversial arms Nasrallah said: “When you ask our resistance to surrender its weapons, you are asking us to be aggrieved and to surrender our dignity to the ugliest enemy which is Israel.”

The Hezbollah chief added, in his televised speech, that the United States is “punishing” Iran and Syria for the changes in Middle Eastern regimes such as Tunisia, Egypt and Libya.

“In order to compensate for their losses in these countries, they are [punishing] Syria and Iran,” he said.

He also said that the

“We are not issuing any threats but this is the reality. The Islamic nations and masses should have a position [concerning these issues].”

Commenting on the Syrian developments, Nasrallah said that “those who are betting on the collapse of Syrian President Bashar al-Assad’s regime [should] stop wasting their time.”

As for the Special Tribunal for Lebanon (STL), he said that the Arab League or wealthy Arab figures should, on the behalf of Lebanon, provide the annual share of funding to the UN-backed court.

Nasrallah compared Lebanon’s STL funding to the US funding of UNESCO, which was halted after Palestine was admitted as a full member last month.

He asked, “Why can the US halt its funding to UNESCO, which is an international commitment, and Lebanon cannot stop funding the STL?”

“I want to comment on Future bloc leader MP Fouad Siniora’s proposal that the Arab League and other countries cover the funding of UNESCO after the US cut its share. Why doesn’t Siniora March 14 parties call for the same solution to fund the tribunal on behalf of the Lebanese government?”

“Most of the March 14 forces did not comment on the issue of suspending UNESCO funds. But if Lebanon decides not to fund the unconstitutional and bogus tribunal, (Assistant U.S. Secretary of State for Near Eastern Affairs Jeffrey) Feltman starts to threaten Lebanon with sanctions, which exposes the U.S. and its allies in Lebanon.”

He slammed the STL as “nonexistent,” advising the rival Lebanese parties to “address the domestic issues and give up their bets on the outside forces.”

Nasrallah also defended the cabinet headed by Prime Minister Najib Mikati, saying that it does not receive “orders” from western countries.

However, he called on the government to finalize projects, make administrative appointments, and “prioritize the people’s needs.”

Four Hezbollah members have been indicted by the STL for the 2005 assassination of former PM Rafik Hariri. However, the Shia group strongly denied the charges and refused to cooperate with the court.