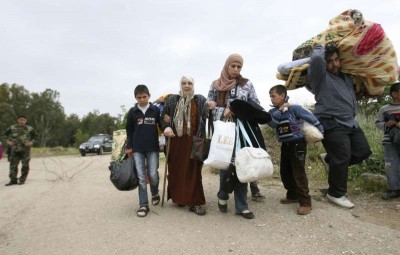 Several March 14 politicians called for the establishment of a place near the border with Syria to accommodate those refugees who have fled unrest, as religious and political leaders from the northern city of Akkar Monday warned the Lebanese government against withholding medical treatment to Syrian refugees.

A statement issued at the end of a lengthy meeting held at the residence of Future bloc MP Mouin Merabi accused Prime Minister Najib Mikati of denying medical care to Syrian nationals fleeing an eight-month crackdown on anti-government protesters.

The group said Mikati had ordered the government-run Higher Relief Council to freeze all medical care to Syrian refugees, of which there are now over 3,800 registered with the United Nations and the HRC in northern Lebanon.

While acknowledging that the HRC had “to some extent” fulfilled its duties toward refugees in terms of hospitalization and health care for the sick and wounded, the participants said they were “surprised” by Mikati’s decision to halt medical assistance.

“We hold the prime minister, who heads the HRC, fully responsible for the outcome of this unjust and arbitrary decision … and we hold the government and the relevant institutions [responsible for] the consequences of their support for the Syrian regime for the sake of implementing its bloody and criminal schemes,” the statement added.

Over the weekend, former Prime Minister Saad Hariri hinted on his Twitter account, that Lebanon should seriously consider establishing a refugee camp in north Lebanon.

Although Hariri did not elaborate, the Pan-Arab daily Ash-Sharq al-Awsat quoted sources in the Future Movement as saying that a number of its members, under the instruction of Hariri, were developing plans to create a base for Syrian refugees in Lebanon.

But the paper said that sources close to the Lebanese government said it was not in favor of the idea and would impede such efforts.

Former MP Mustafa Alloush, an outspoken critic of the Syrian regime and a member of the Future Movement, told reporters Tuesday that the international community should be leading efforts to establish the refugee facilities, not just local non-governmental organizations.

Amal Movement MP Qassem Hashem on Thursday rejected the idea of establishing a refugee camp for Syrian refugees in Lebanon.

“Speaking from a humanitarian point of view, there must not be any Syrian refugee camp in Lebanon, because the attempt to form [organizations] will spearhead a battle against the Syrian regime that will disrupt the country,” Hashem told OTV channel.

Amal Movement which is headed by Speaker Nabih Berri is a close ally of the Iranian and Syrian backed Hezbollah militant group . Both Hezbollah and Amal have been expressing support for the Syrian regime ever since the uprising began last March.

Hashem also said that “the March 14 coalition is trying to prove that it is an integral part of the Syrian opposition.”

Mikati has come under mounting pressure over the kidnapping of Syrian dissidents in Lebanon, with the opposition accusing his government of kowtowing to the regime in Damascus.

“The government of Najib Mikati is employing all diplomatic, security and political channels to back the Syrian regime,” said Fares Soeid, secretary general of the March 14-led opposition.

“It is clear that it has become a pawn in the hands of that regime.”

Soeid told AFP that as recently as Sunday, two Syrians were arrested at Beirut international airport and handed back to authorities in Damascus, which is battling an eight-month revolt threatening the regime of President Bashar Assad.

According to the Syrian opposition, at least 13 dissidents have been kidnapped in Lebanon in the past few months.

“We have been informed of dozens more cases involving Syrians in Lebanon who were kidnapped, beaten up or threatened only because they are opposed to the Syrian regime,” said Omar Idlibi, a spokesman for the Local Coordination Committees, an activist network.

“Many of them have urged us not to reveal their names or any details about what happened to them because they don’t feel they will get any protection from the Lebanese state,” added Idlibi, who is based in Beirut and is also a member of the Syrian National Council, a key opposition group.

The SNC this week sent a letter to Mikati urging him to act on the matter and guarantee the safety of activists who remain in Lebanon.

Miqati has acknowledged that kidnappings have taken place but has downplayed them as isolated incidents.

The issue, however, has ignited a firestorm of debate between the pro- and anti-Syria camps in Lebanon.

Minister of Social Affairs Wael Abu Faour said on Thursday that the issue related to Syrian refugees who have been forced to flee to Lebanon due to the violence in Syria “is a humanitarian issue and not a political one,” National News Agency reported

The Lebanese government needs to carry out its responsibilities toward Syrian refugees in the country “away from any political considerations,” he said during a press conference.

Abu Faour said that based on recent statistics issued by the United Nations High Commissioner for Refugees (UNHCR), there are currently 3,505 Syrian refugees in Lebanon’

Abu Faour , a key member of the Progressive Socialist party which is headed by MP Walid Jumblatt told reporters that it is “useless to deny the presence of Syrian refugees in Lebanon.”

“Currently there are 3,505 registered persons in the North and Akkar, residing mostly with host families in difficult circumstances,” a statement issued by the UNHCR said on Friday.

The minister added that the ministry of social affairs has no powers to tackle the issue of Syrian refugees, adding that the matter is the responsibility of the Higher Relief Commission.

Similarly Jumblatt condemned on Wednesday the kidnapping of Syrian opposition members in Lebanon , urged the Lebanese government to protect Syrian refugees and warned against the reemergence of a “new era of mandate” in Lebanon a possible reference to the “infamous” security hegemony that controlled the country for nearly three decades .