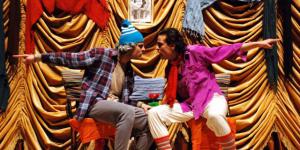 Two Syrian theatre actors known for their plays mocking authority headed to Egypt on Thursday, fleeing possible arrest in their country but vowing to pursue their pro-democracy struggle.

Mohamed and Ahmed Malas, 29-year-old twin brothers, left to Cairo from Beirut, where they had been living in hiding for the past month.

The two brothers spoke with AFP in Beirut late Wednesday but asked that their statements be withheld pending their arrival in Cairo.

The twins said they were concerned about their safety while in Lebanon where they feared they could be kidnapped or arrested because of their stance against the Syrian regime which is battling an eight-month revolt.

“We are headed to Egypt where we will continue our work in support of the revolution in Syria,” said Mohamed.

He said he and his brother avoided publicity while in Lebanon for fear they could be arrested or kidnapped.

Lebanon, whose government is dominated by the pro-Syrian Hezbollah, has come under scrutiny in recent weeks over reports of a number of Syrian dissidents being arrested or kidnapped.

The Malas brothers said they mistakenly thought they would find a safe haven in Beirut after Syrian intelligence agents showed up at their home in Damascus seeking to question them.

“But we lived with the same fear in Beirut as we did in Damascus, especially after all the stories about dissidents being kidnapped began emerging,” said Ahmed.

“I think Egypt today has become safer than Lebanon or Syria,” he added.

The brothers were among a number of actors, journalists and writers who were arrested in July after staging a demonstration in central Damascus.

Their recent plays, including one entitled “Tomorrow’s Revolution Postponed to Yesterday”, poke fun at authority and have been usually performed in their modest bedroom in Damascus to avoid official scrutiny.

Photo: It’s only when they address each other by name that identical twins Ahmad and Mohamed Malas, 29, can be distinguished from one another.