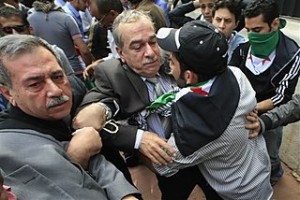 Syrian activists say at least 15 people have been killed across Syria, including an 8-year-old girl and six soldiers.

The British-based Syrian Observatory for Human Rights said the girl was among several people killed Thursday in Homs, which has become the epicenter of the uprising.

In some of the day’s attacks, security forces opened fire as they conducted raids in search of dissidents. There also were reports of fighting between army defectors and soldiers.

The U.N. estimates some 3,500 people have been killed in the Syrian crackdown on dissent over the past eight months.

Though internationally isolated, President Bashar Assad appears to have a firm grip on power, retaining the loyalty of most of the armed forces, despite some defections.

Photo: Syrian protesters prevent Abdul-Aziz al-Khair, a member of the Syrian National Coordination Committee, second from left, and other opposition leaders from entering the Arab League headquarters where they were to hold talks with the organization’s chief on violence in Syria, in Cairo, Egypt, Wednesday, Nov. 9, 2011