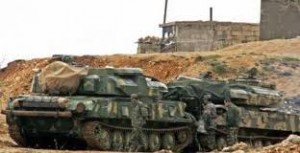 A growing number of cross-border incursions by Syrian troops into Lebanese territory has aggravated political rivalries in Lebanon between those who oppose the regime of Syrian President Bashar al-Assad and those who support it.

Since the beginning of October, Syrian soldiers have penetrated Sunni-populated areas along Lebanon’s remote and poorly marked eastern border on a number of occasions, reportedly killing and abducting several people.

Unlike Syria’s stronger neighbors – Turkey, Iraq, Jordan, and Israel – Lebanon has long lived under Syria’s shadow and is more vulnerable to interference as the Assad regime pursues its crackdown on the Syrian opposition, elements of which have begun to arm themselves and fight back.

“People here have grown used to [Syrian] violations, but what is worrying us is a large operation by the Syrians in Arsal. We are almost positive it is going to happen,” says Ali Hojeiry, the mayor of Arsal, a town of 40,000 Sunnis tucked into barren mountains along Lebanon’s eastern frontier with Syria.

Repeated incursions, an abduction in Beirut

Since then there have been further incursions reported elsewhere along the border.

On Tuesday, Syrian troops shot and killed a dual Lebanese-Syrian national and captured another man on the border as part of a security clampdown on towns and villages south of the flashpoint city of Homs, which lies just 20 miles north of the Lebanese frontier. On Wednesday, gun battles between Syrian security forces and army defectors erupted in the border area.

There were mixed reports on the number of casualties (one report said two officers and six soldiers, all deserters, were killed) and the precise location of the incident. Much of Lebanon’s eastern border with Syria is unmarked and, during calmer times, easily accessed in places by residents of both countries.

On Monday, Gen. Ashraf Rifi, Lebanon’s top police chief who is close to the anti-Syrian March 14 coalition, released details of an investigation into the abduction of three Syrian brothers in February, allegedly by the Syrian embassy in Beirut. The three brothers, who had been questioned by police for handing out anti-Assad flyers, allegedly were kidnapped in a Beirut suburb and driven in Syrian embassy vehicles to the border where they were handed over to Damascus-backed Palestinian militants.

The Lebanese government, dominated by allies of Damascus, has played down the reported incursions and the abductions of the Syrian brothers. But the opposition has seized upon the reports to accuse the government of serving Syrian interests.

“The expansion of the Syrian regime in Lebanon includes more than incursions into Lebanese territories,” said the March 14 coalition in a statement. “The Syrian regime is not only hinting at the possibility of establishing permanent [military] posts in Lebanon… but also playing a major role… in oppressing solidarity with the Syrian people through the abduction of activists.”

Fears in Arsal of a larger military campaign against their town – which has a history of opposition during Syria’s past hegemony over Lebanon – are probably misplaced. Most of the incursions have consisted of minor and brief penetrations of the border, ostensibly to try block weapons being smuggled into Syria.

“It’s not a coincidence that the [Syrian] regime’s security operations have focused on the borders first. They want to secure them against arms smuggling,” says a European ambassador to Damascus in a recent briefing to reporters in Beirut.

Still, it is easy to understand the paranoia that has gripped the residents of Arsal.

The town is geographically isolated, linked to the rest of Lebanon only by a single road that winds over the surrounding mountains. More pertinently, as the only Sunni town in an area that is predominantly populated by Shiites who support the militant Hezbollah organization and back Assad, Arsal faces political and sectarian isolation.

The cluster of farmsteads exposed to the Syrian troop incursions are reached by a rutted stone track that winds across an arid landscape criss-crossed by dry river beds. There were no Syrian soldiers to be seen at the end of a tense hour-long drive through the wilderness. However, according to Hussein Wehbe, a farmer who lives with his family in a two-room house, Syrian troops deployed on a hill a few hundred yards to the east that morning.

“They fired shots in the air and stayed on the hill for about half an hour,” he says. “If I take one step closer to the border from here, they will shoot at me.”

Asked why he chose to stay when most other farmers had fled, he says, “This is my land and I’m not going to go anywhere else”.