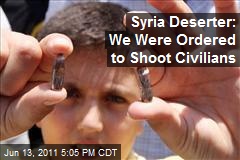 The United Nations’ top human rights official warned on Friday that the “ruthless repression” of the Syrian regime could develop into a “full-blown civil war.” Citing a death toll that they say has now topped 3,000, UN officials called for international action to protect Syrian protesters.

While antigovernment protesters are still dying in high numbers, the numbers of Syrian soldiers who are dying are creeping higher as well, signaling that the uprising is sliding into a two-sided, armed fight.

According to the Syrian Observatory for Human Rights, 25 of the 36 people killed in clashes Friday were Syrian Army soldiers, Agence France-Presse reports. The group said it was surprised “at the silence of the Syrian authorities on the killings of dozens of regular Army soldiers in the past few days.”

Many of the clashes have been between Army soldiers and Army deserters who switched sides because they were unwilling to fire on protesters, according to the human rights group. Protesters called for demonstrations today in support of the defected soldiers. The US and Europe have warned repeatedly that without reform, the protest movement, not just its Army deserter supporters, will turn to violence.

Navi Pillay, the UN High Commissioner for Human Rights, would not suggest what international action should be taken, and said the question of a military intervention was up to the UN Security Council, not her. “That obviously is for states to decide. What has been done so far is not producing results and people continue to be killed virtually every single day,” her spokesman said, according to Reuters.

However, this summer Ms. Pillay encouraged the Security Council to refer several Syrian officials to the International Criminal Court to be tried for crimes against humanity – a step that preceded the UN-approved intervention in Libya.

In an Op-Ed for The New York Times, Salman Shaikh, director of the Brookings Doha Center and a fellow with the Saban Center for Middle East Policy at the Brookings Institution, writes that the US effort to stay at arm’s length from Syria’s opposition no longer makes sense. The threat of sectarian violence remains, but as the uprising becomes more violent, it will happen in spite of foreign backing for the opposition, not because of it, he says.

The longer the current situation lasts, the more likely it is that Syria’s delicate ethnic and sectarian fabric will be torn apart. Opposition figures, including those from the Muslim Brotherhood, are fearful of increasing reprisals against the Alawite and Christian elite, which they would be unable to prevent.

The government’s efforts to sow strife, including a spate of assassinations of academics and a campaign of rape targeting women and girls in predominantly Sunni towns, is making nonviolent protest seem untenable to the opposition.

Syria’s combustible ethnic mix was once grounds for American hesitation in supporting the opposition; now, with violence spiraling out of control, it has become a reason for further American involvement.

The US has also stayed away partially in an effort to prevent the opposition from being portrayed as “the West’s stooges,” but now its distance is seen as a lack of confidence in a post-Assad Syria because the opposition is requesting (privately, for now) foreign assistance, Mr. Shaikh writes.

The European Union agreed Thursday to add the Commercial Bank of Syria, a state-owned bank that holds much of Syria’s foreign reserves, to its sanctions list, Reuters reports. Washington made the move in August.

The combination of sanctions and decline in investment and tourism have taken a heavy toll on the Syrian economy, according to a separate Reuters report. Syrian Finance Minister Mohammad al-Jleilati last month said the economy would grow 1 percent this year. However, an International Monetary Fund forecast for the Syrian economy, released last month, predicted a 2 percent contraction, down from a 3-percent growth forecast made earlier this year.