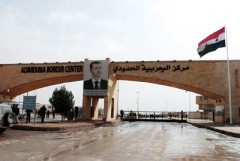 Syria closed one of its border crossings with Turkey and barred Turkish citizens from entering Syria following bloody clashes in the city of Qamishli, Anatolia news agency reported on Saturday.

Turks were not allowed to cross into Syria from the border gate in Nusaybin city in southeast Turkey, which is only a few kilometers away from Qamishli, the local governor Murat Girgin told Anatolia.

Security forces opened fire at tens of thousands of mourners who turned out for the funeral of a slain Kurdish opposition leader in northeastern Syria Saturday, killing at least two people, activists said. People marched through the streets of Qamishli in the funeral procession for Mashaal Tammo, one of Syria’s most prominent opposition figures, who was gunned down Friday by masked gunmen in the city. The slaying was the latest in a string of targeted killings in Syria as the country slides further into disorder, seven months into the uprising against President Bashar Assad.