Yemen’s president says will step down in coming days 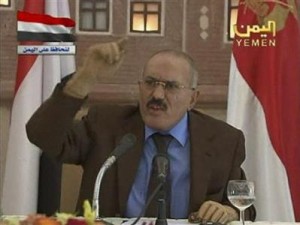 Yemen’s President Ali Abdullah Saleh said Saturday he would step down in “the coming days” after months of protests against his 33-year rule that risked tipping the dirt-poor country into civil war, but the government said his exit was not imminent.

“I reject power and I will continue to reject it, and I will be leaving power in the coming days,” Saleh said in a speech on state television.

Opponents were skeptical of the wily political survivor who has backed out of a Gulf-brokered power transition plan three times this year.

They argue the speech is a maneuver to ease pressure ahead of a briefing to the U.N. Security Council by U.N. Yemen envoy Jamal Benomar, who left Sanaa empty-handed after days of shuttle diplomacy between the opposition and the ruling party.

Saleh’s comments were as vague as others he has made about stepping down and were seen by Yemenis as yet another ruse by a leader who has spent the “Arab Spring” — pro-democracy uprisings across the region — saying he is about to quit.

Protests against Saleh’s rule paralyzed Yemen, weakening government control over swathes of the country and fanning fears al Qaeda’s regional wing may use the upheaval to expand its foothold near oil-shipping routes through the Red Sea.

Diplomats have said they are close to getting international consensus for issuing a Security Council resolution which may add to pressures on the country to finalize a power transfer.

“This is new propaganda from Saleh before Yemen is discussed at the Security Council,” said Mohammed al-Sabri, a spokesman for the opposition’s political coalition. “Four months have passed since he said he accepted the Gulf transition deal, so what is stopping him? He doesn’t even need a few days to do it.”

The veteran leader has been clinging to power while opposition and ruling party representatives cast about for a formula to reach a deal, deadlocked in a debate over whether Saleh should relinquish power before or after an early election.

“The president has always been clear that we are committed to either the GCC initiative or the U.N.’s implementation mechanism that will move us to an early election. He has been clear that he will leave power in that capacity,” Deputy Information Minister Abdu al-Janadi told Reuters.

“He said this to show his commitment to this plan, but there is no plan for a resignation or transfer of powers before we have agreed and signed a deal. That would just plunge the country into chaos or even war.

“He is ready to leave power in days yes, but whether this happens in the coming days or months will depend on the success of negotiations for a deal.”

Saleh made a surprise return in September to Yemen after three months convalescence in Saudi Arabia from a June assassination attempt. Many in the capital, which has been wracked with violence in recent weeks, feared his return might signal a move toward asserting power through military might.

“I call on my supporters to persevere and to confront any challenges,” Saleh said, in his first television appearance with his head uncovered since the bomb attack on his compound.

He also wore thick tan gloves, probably to cover skin grafts he had for severe burns he suffered in the explosion.

Abdulghani al-Iryani, a Yemeni political analyst, said: “This is just Saleh’s latest line. I don’t think it is really anything new. I remember he once before said he would be ready to leave any day, so I don’t think he means what he said.”

Saleh has made many verbal concessions during the protests against him which began in January, including promising to step down in return for immunity from prosecution.

Frustration with Saleh’s intransigence had pushed Yemenis, many of them heavily armed and with experience of wars and insurgencies, closer to a violent power struggle that could give al Qaeda’s regional wing more room to operate.

All of these factors spark concern for stability in a country that sits on a shipping lane through which more than three million barrels of oil pass each day.

Saleh is a clever operator who has survived many tussles with rivals, and skilfully used bribes and favors to keep tribal and political backers loyal.

But keeping his allies’ loyalty has become more difficult as Yemen sinks into an economic crisis.

More than 40 percent of Yemenis live on less than $2 a day while a third face chronic hunger. Dwindling water and oil supplies are also a problem.

Many opponents of Saleh said the biggest lie in the president’s speech may be found in the growing military escalation in Sanaa, now carved into areas controlled by Saleh’s forces and others by the pro-opposition troops of defected general Ali Mohsen.

Mohsen dealt a major blow to Saleh by throwing his weight behind the protesters in March. His troops clashed with forces lead by Saleh’s son and nephew in recent weeks, rocking the capital with days of heavy shelling. Some major streets are still shut due to sporadic gunfights.

Analysts said Saleh’s handover and early elections may be meaningless if the capital and much of the country is still under de-facto military control by his relatives.

“There was something about this speech that made me nervous,” said Yemeni political analyst Ali Seif Hassan. “Unifying the army is the problem now…it’s clear he wants to run the elections while his son and relatives are still running most of the military.”

In his speech, Saleh signaled that he was backing the vice president for future leadership. In footage shown after the speech, it was Vice President Abd-Rabbu Hadi Mansour, not Saleh, who greeted lawmakers gathered at the presidential palace.

Mansour has long been seen as the ideal consensus candidate acceptable to the opposition, though hardliners in the ruling party have shunned him.

“I want to praise the vice president for his leadership in my absence… He is an experienced military man,” Saleh said.

Saleh’s opponents said even if he stepped down, they feared the military situation was beyond politicians’ control.

“The seriousness of Saleh’s speech will be tested by his agreement to form a neutral committee to reorganize the military before early elections. But elections will be meaningless if our army is divided,” said opposition leader Mohammed al-Mutawakil.

Saleh pledged cooperation with the United States after the September 11, 2001, attacks on U.S. cities and received military and economic aid in return. But by 2004 al Qaeda appeared to be in disarray and U.S. interest waned.

In 2006 Washington cut aid to mark its anger at Yemen’s perceived lenience toward militants and U.S. counter-terrorism officials rank Yemen as a top concern after Afghanistan and Pakistan.

Saudi Arabia is the Yemeni government’s biggest financial donor and most important ally, along with the United States, but some Yemenis resent the influence of their wealthy neighbor.

The Saudis fear that al Qaeda’s local wing, renamed al Qaeda in the Arabian Peninsula (AQAP), is trying to relaunch armed attacks from Yemen to destabilize the kingdom and possibly other allies in the Gulf.

Even before the wave of pro-democracy protests against his nearly 33-year rule, Saleh was struggling to quell a separatist rebellion in the south and a Shi’ite insurgency in the north.