by yalibnan
522
Lebanese Prime Minister Najib Mikati has failed in his experiment and it has become clear that he is taking orders from Hezbollah.
Share: 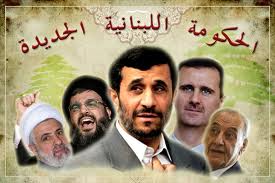 Lebanese Prime Minister Najib Mikati has failed in his experiment and it has become clear that he is taking orders from Hezbollah. In fact, all the positions and decisions taken so far by his government have served the interests of Hezbollah and the governments of Iran and Syria.

The last of such indications was Mikati’s decision to allow Iranians to enter Lebanon without visa. This decision owes justification because it would have been logical if Iran were acting naturally like other governments that respect sovereignty of other countries or if Iranians were in good economic condition and were enjoying a good standard of living. In such a situation, we would have assumed that the Lebanese agenda was aimed at encouraging tourism.

However, due to the current position of the Iranian government and its aggressive attempt to export violence and tension under the pretext of ‘exporting revolution,’ any Iranian going to Lebanon will be considered a member of the Revolutionary Guard or Basij or an assassin or an arm dealer entering Lebanon to execute dastardly acts as they have been doing in Syria.

The decision of Najib Mikati is nothing but clear declaration of selling Lebanon to Iran. With this decision, Mikati is allowing Iran to colonize the country and rule it as it pleases and locate strategic bases along the beaches of the Mediterranean. Leaders usually ensure that Arabs and non-Arabs cannot enter Lebanon without visa, but this government allows Iranians whose hands are covered with Lebanese blood to freely enter the country to perpetrate heinous activities.

We want to ask Najib Mikati why he takes orders from Hezbollah and its associates and executes their belittling decisions. Has the country become a province of Iran? The Lebanese people want you to face the reality with courage rather than use the language of denial as you have been doing for the past months. In fact, your actions contradict your denials at every point.

There is no point in trying to cover Iranian tools in games that are not hidden from anybody, such as the announcing of payment of entitlements to the Special Tribunal on Lebanon in installments. This failure to seriously deal with the rulings of the court, especially the failure to arrest suspects and hand them over to international justice increases the number of grievances against your government.

If Mikati really wishes to rescue Lebanon, he should tender his resignation and confess his inability to resist the diktats of Hezbollah. This is the only way he can avoid being a witness of falsehood and prevent the further tightening of Iran’s control over Lebanon. By doing so, he can also save himself from being used as a pawn in a game being played by other countries and show that he really loves his country which has suffered since the past three decades.