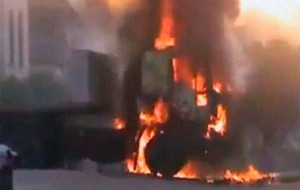 The UN Committee on the Rights of the Child chief Jean Zermatten said in Geneva that it “had obtained a list on September 22 stating that at least 187 children were killed.”

He said the data was provided by UN agencies and non-governmental organizations, the Dubai-based al Arabiya broadcaster said.

The committee called on the Syrian government to take “immediate measures to stop the use of excessive and lethal force against civilians and to prevent further violence against children, including killings and injuring.”

On Thursday, the UN said more than 2,900 people had been killed during the uprising against the regime of President Bashar Al-Assad.

Photo: A vehicle burns in the city of Hama in this still image taken from video July 31, 2011. Syrian army tanks firing shells and machineguns stormed the city of Hama on Sunday, killing at least 45 civilians in a move to crush demonstrations against President Bashar al-Assad’s rule, residents and activists said.