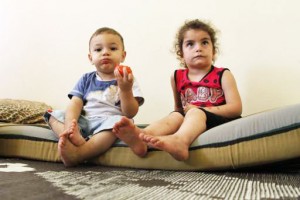 Wadi Khaled, Lebanon – The house on the Lebanese side of the river is modest. Trampled plastic bottles and children’s sandals lay in the dust next to the entrance.

Bullets fired by Syrian soldiers have put holes in the plaster of the living room, and on a door frame.

‘They shot at us, because they saw our house as the first contact point for refugees wading through the river to Lebanon,’ said a man who lives here – on the Lebanese side of Wadi Khaled – with his children.

Even on this clear autumn day, soldiers are looking this way. They don’t even need binoculars to watch the people on the other side of the river.

Some of the soldiers are in a military vehicle, while others have set up camp under a yellow plastic tarp on the roof of a farmhouse.

They are here to prevent the escape of regime opponents who could tell the outside world about the repression carried out by President Bashar al-Assad’s regime. But they are not always successful.

The Lebanese part of Wadi Khaled, where most people live off smuggling cigarettes and petrol, now has hundreds of Assad opponents staying at schools, barns and ruins. They have arrived over the past six months, since a protest wave erupted in Syria.

Abier, 29, fled in May from Tell Kalach in Syria. She now lives with her husband and two young children in a small classroom at an unused primary school. A Lebanese foundation supplies food to the 82 refugees who are staying in the school building.

When Abier meets strangers, only her eyes are visible, with the rest of her face covered by a black veil.

As she talks about her father going to a military hospital in June in the city of Homs to identify the corpse of her 23-year-old brother, her gaze becomes hard and penetrating.

‘He was shot on May 13 at a large demonstration in Tell Kalach, but he was still alive. They took him with them. And when my father found him, he could hardly recognize him. That is how bad they tortured him,’ Abier said.

It is experiences such as these, as well as videos showing civilians being humiliated and abused, that led Syrian peaceful resistance to take on the characteristics of an armed conflict against the state in some places.

In the cities of Homs, Hama and Deir ez-Zor, bodies of deserted soldiers are said to be rotting. Civilians shot them in revenge for the death of a relative.

‘For a couple of weeks now, we have been hearing that they are shooting back. The cup is full. There is no other way now,’ Abier says. She does not want to reveal her last name, because some of her relatives are still in Syria.

However, images of soldiers and militia humiliating and torturing men and boys are even more damaging for the regime than the reports of refugees.

Soldiers filming such scenes with their mobile phones ‘do it for money,’ a scornful Sohib Akkari says.

‘They sell these videos through middlemen to the revolutionaries,’ adds Akkari, a young Syrian who fled to Lebanon together with Abier and their families in May. He is Turkmen and a Sunni Muslim.

In this part of Lebanon, where almost only Sunnis live, Akkari feels halfway safe with his extended family. ‘There is a shorter escape route over the border, but nobody crosses there, because Shiites live on the Lebanese side, supporters of the (Syrian-allied) Hezbollah movement. We are not welcome there,’ he said.

Abier hopes that the Arab states come to the aid of the Syrian demonstrators. Akkari, who recently worked two years in the United Arab Emirates, hedges his bets on the West.

‘If NATO establishes a no-fly zone, like it did in Libya, then more soldiers would dare to desert,’ he said.

Akkari does not want to return to Syria before the al-Assad family is thrown out of power. But the Lebanese, he says, will not let him return to the Emirates, because he does not have a Syrian exit stamp in his passport.