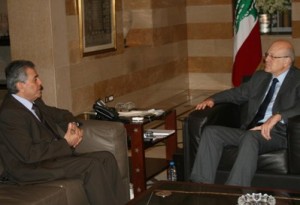 Syrian Ambassador to Lebanon Ali Abdel Karim Ali told the reporters on Tuesday following a meeting with Prime Minister Najib Mikati at the Grand Serail in Beirut that the Lebanese premier” is welcome in Syria anytime ….it is his home”

The envoy added : “Today we did not discuss this matter”

Ali said that he does “not comment on newspaper reports” in reference to a report saying that Mikati “secretly” visited Syria last September.

Ali also addressed the situation in his country saying that “the crisis in Syria has ended and Syrian President Bashar Al-Assad is implementing critical reforms.”

Al Mustaqbal newspaper published on Tuesday a report in which it revealed that Mikati visited Damascus Airport secretly and met with Syrian Foreign minister Walid Muallem and Rustum Ghazali former Syrian intelligence chief who was based in Lebanon until 2005 when Syrian troops withdrew under pressure after nearly 3 decades of military presence.However, the PM denied the report in a statement issued by his media office later on the day.

The UN security council is expected to vote today on a resolution condemning the brutal crackdown by the Syrian security forces against the pro-democracy protesters. Over 2700 protesters have reportedly been killed since the uprising erupted last March 15