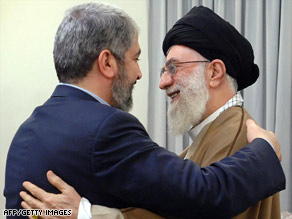 Iran’s supreme leader assailed a two-state solution for Israel and the Palestinians on Saturday, saying the Palestinian bid for statehood at the United Nations is doomed to fail.

Ayatollah Ali Khamenei said the Palestinians should not limit themselves to seeking a country within the West Bank, east Jerusalem and the Gaza Strip — which would implicitly recognize Israel — because “all land belongs to Palestinians.”

Palestinian President Mahmoud Abbas has asked the U.N. Security Council to recognize an independent Palestinian state in those areas, which were captured by Israel in the 1967 Mideast war.

Israel and the United States oppose the U.N. bid, saying there is no substitute for direct peace negotiations. But with Israel continuing to build settlements in the West Bank and east Jerusalem, Abbas says there is no point in talking.

Iran doesn’t recognize Israel and considers it an archenemy.

Khamenei, who spoke at a pro-Palestinian conference in Tehran, called Israel a “cancerous tumor” that should be removed.

Iran supports the militant Palestinian Hamas group, which rules Gaza and which does not back the statehood bid pushed by Abbas and his Western-backed Fatah movement.

“Our claim is freedom of Palestine, not part of Palestine. Any plan that partitions Palestine is totally rejected,” Khamenei told the gathering. “Palestine spans from the river (Jordan) to the (Mediterranean) sea, nothing less.”

Khamenei claimed that a two state solution would mean “giving in to the demand of the Zionists” and that it would “trample the rights of the Palestinian people” to live on their land.

“The declarations of hatred from the ayatollah regime on the intention to destroy the state of Israel reinforces the government’s steadfast position for the security needs of Israel’s citizens and the demand for recognition of Israel as the Jewish state,” Netanyahu said.

The conference in Tehran was attended by senior Palestinian militant leaders, including Syria-based Hamas chief Khaled Mashaal, who told the gathering that “resistance” was the only option left for the Palestinians.

“Palestinians must resort to resistance no matter how costly it is, until Palestine is free and Israel is destroyed,” Mashaal said.

Mashaal’s comments could potentially undermine Abbas’ U.N. bid and stall talks between the rival Palestinian factions on power-sharing. The talks were expected to resume in the coming week.

Abbas and Fatah favor a negotiated peace deal with Israel, while Hamas is sworn to Israel’s destruction. Israel has warned Abbas it will not negotiate with any Palestinian government that includes Hamas.