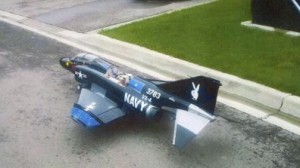 Model airplanes are suddenly on the public’s radar as potential terrorist weapons.

A 26-year-old man from a Boston suburb was arrested Wednesday and accused of plotting to attack the Pentagon and the U.S. Capitol with remote-controlled model planes packed with explosives.

These are not balsa-wood-and-rubber-band toys investigators are talking about. The FBI said Rezwan Ferdaus hoped to use military-jet replicas, 5 to 7 1/2 feet long, guided by GPS devices and capable of speeds over 100 mph.

Federal officials have long been aware of the possibility someone might try to use such planes as weapons, but there are no restrictions on their purchase — Ferdaus is said to have bought his over the Internet.

Counterterrorism experts and model-aircraft hobbyists said it would be nearly impossible to inflict large-scale damage of the sort Ferdaus allegedly envisioned using model planes. The aircraft are too small, can’t carry enough explosives and are too tricky to fly, they said.

“The idea of pushing a button and this thing diving into the Pentagon is kind of a joke, actually,” said Greg Hahn, technical director of the Academy of Model Aeronautics.

Rick Nelson, a former Navy helicopter pilot who is now a senior fellow at the Center for Strategic and International Studies, said Ferdaus would have had to hit a window or other vulnerable area to maximize damage, and that would have taken precision flying.

“Flying a remote-controlled plane isn’t as easy as it actually looks, and then to put an explosive on it and have that explosive detonate at the time and place that you want it add to the difficulty of actually doing it,” he said.

Ferdaus, a Muslim American from Ashland, was arrested after federal agents posing as al-Qaida members delivered what he believed was 24 pounds of C-4 explosive, authorities said. He was charged with attempting to damage or destroy a federal building with explosives. A federal affidavit claims he began planning “jihad” against the U.S. in early 2010 after becoming convinced through jihadi websites and videos that America was evil.

Ferdaus had a physics degree from Northeastern University and enjoyed “taking stuff apart” and “learning on my own,” according to court papers.

Ferdaus’ plan, as alleged in court papers, was to launch three such planes from a park near the Pentagon and Capitol and use GPS to direct them toward the buildings, where they would detonate on impact and blow the Capitol dome to “smithereens.” He planned to pack five pounds of plastic explosives on each plane, according to prosecutors.

James Crippin, an explosives and anti-terrorism expert, said that much C-4 could do serious damage — a half-pound will obliterate a car. But he said getting a stable explosive like C-4 to blow up at the right time would have been hugely difficult.

And there were slim prospects of causing any serious damage to buildings like the Pentagon and Capitol, which are undoubtedly hardened to withstand explosions, according to Crippin, director of the Western Forensic Law Enforcement Training Center.

“Basically, I think he’s suffering from delusions of grandeur,” he said.

Hahn said the heavier of the two models Ferdaus was allegedly planning to use could carry a maximum of two pounds of plastic explosive before malfunctioning. That’s not including the weight of any GPS system, he added.

“It’s almost impossible for him to get this done,” he said.

Remote-controlled aircraft have been considered by terrorists before. In 2008, Christopher Paul of Worthington, Ohio, a Columbus suburb, pleaded guilty to plotting terrorist attacks in the U.S. and Europe using explosive devices. Prosecutors said he researched remote-controlled boats and a remote-controlled 5-foot-long helicopter.

And after Sept. 11, federal agents asked the Academy of Model Aeronautics’ 143,000 members to watch for any fellow enthusiasts who might be buying planes with bad intentions.

Well before the Massachusetts arrest, police in Montgomery County, Md., put out a terrorist warning to hobby shops to be aware of customers “who don’t appear to be hobbyists” buying model airplanes with cash and asking how they can be modified to carry a device.

The Federal Aviation Administration is devising new rules for model airplanes and other unmanned aircraft, but the restrictions are aimed primarily at preventing collisions. Under current FAA rules, such planes are generally limited to flying below 400 feet and away from airports and air traffic.

Massachusetts prosecutor Gerry Leone, who handled the prosecution of would-be shoe bomber Richard Reid, said terrorists are always building bombs out of common, legitimate items, and imposing restrictions on buying model aircraft would not make sense simply because of this one case.

But he said law enforcement might want be more vigilant about such purchases.

Similarly, Rep. John Mica, R-Fla., chairman of the House Transportation and Infrastructure Committee, said recent advances in model airplane technology could make them more attractive to terrorists. But he said the answer is better intelligence, not trying to regulate hobbyists and their toys.

“Kids have them, people fly them, groups are organized just to engage in this type of pastime activity,” the congressman said. “It would be almost impossible to regulate the little engines and things, propellers.”

Photo: This undated photo released Sept. 28, 2011 by the U.S. Department of Justice shows a large remote controlled aircraft similar to what the department said suspect Rezwan Ferdaus plotted to fill with C-4 plastic explosives to use in an attack of the Pentagon and U.S. Capital.