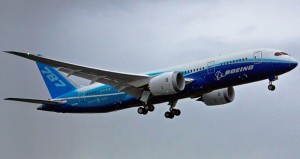 Three years after it was scheduled to be released, Boeing finally delivered its first 787 Dreamliner aircraft Sunday.

The new airplane is made of lightweight plastic composites that the manufacturer says will save airlines 20 percent in fuel. Other added features include better cabin circulation and electronically dimming windows.

All Nippon Airways, a Japanese airline, was the first to receive Boeing’s new jet.