Saudi King says women will be members in next Shoura Council 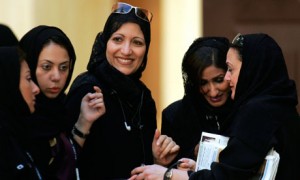 Saudi Arabia will allow women to become full members of the Shoura Council and be candidates for the first time in future municipal elections, King Abdullah said today.

“We refuse to marginalize the role of women in Saudi society in every field of work,” Abdullah said on state television as he inaugurated a new session of the council. “Women have the right to submit their candidacy for municipal council membership and have the right to take part in submitting candidates in accordance with Shariah.”

The Riyadh-based council, a 150 member assembly, is appointed by the king to advise on legislation. The assembly consists of 12 committees, including for human rights, foreign affairs and energy. The council, whose current speaker is Abdullah Al al-Sheikh, is permitted to propose draft laws and present them to the king.

Saudi Arabia enforces gender restrictions interpreted from the Wahhabi version of Sunni Islam. Men and women are strictly segregated in public, including at schools, restaurants and lines at fast-food takeouts. That keeps women out of sales jobs in malls and stores, unless the outlet caters exclusively to a female clientele.

Abdullah, who was born in 1924, has promised to improve the status of women and opened the first co-educational university in 2009. He appointed the kingdom’s first female deputy minister, Nora bint Abdullah al-Fayez, the same year and has said he will provide more access to jobs for women. Women are still not allowed to drive.

The Shoura Council agreed in June that the Ministry of Municipal and Rural Affairs should complete procedures that will allow women to vote in municipal elections “in line with Islamic law,” the official Saudi Press Agency reported.