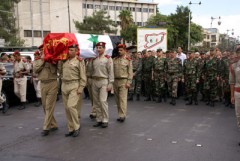 The Syrian army’s deputy chief of staff has died of a heart attack, the official SANA news agency said on Saturday as anti-regime protests continue to sweep the country.

“The high command of the Syrian armed forces announces the death on Friday at 4:30 pm (1330 GMT) of the army’s deputy chief of staff, General Bassam Najm Eddin Antakiali, who succumbed after suffering a heart attack,” it said.

“His burial will take place in the martyrs’ cemetery in Damascus on Saturday.” SANA said