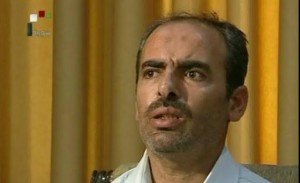 Lieutenant Colonel Hussein Harmoush fled Syria and took refuge in Turkey then showed up in Syria once again and retracted in a TV interview all earlier anti-regime statements. The mystery is more or less solved as information surfaced about the involvement of Syrian, Turkish, and Iranian intelligence in bringing the dissident back.

According to information posted on the social networking website Facebook, Turkish intelligence officers who, like Syrian President Bashar al-Assad, belong to the Alawite sect, took part in the mission of bringing Harmoush, the most senior defector in the army, back to Syria. Their role, however, was reportedly unofficial and the Turkish authorities were not aware of the abduction. The disappearance of Harmoush from its territories and his subsequent appearance in Syria embarrassed the Turkish government, which has launched an investigation into the matter.

The story has it that Harmoush was invited to dinner outside the refugee camp where he was staying in the southern province of Hatay. He was supposed to meet a Turkish officer to discuss possible ways of offering assistance to the revolutionaries in Syria and arming defecting military officers.

Harmoush, unlike what is believed, did not go to that meeting alone. According to the recently released account, he was accompanied by two other dissident officers and they were also abducted; their whereabouts remain unknown. The three officers were drugged with sleeping pills which were added to their food abd then smuggled across the Turkish-Syrian borders with the help of Turkish intelligence officers.

Following the indignation of Syrian opposition at the role Turkey played in repatriating Harmoush, Turkish authorities started an investigation and three Syrian intelligence operatives, one of them an Iranian citizen, were arrested and are currently being interrogated by Turkish intelligence.

Hussein Harmoush’s brother Ibrahim confirmed the manner of his brother’s abduction which coincides with the latest information.

“Hussein disappeared after meeting a Turkish officer in the refugee camp,” he told Al Arabiya in a phone interview. “He would have never been taken back to Syria without Turkey’s assistance.”

Ibrahim added that the following day he asked that same Turkish officer (who he had seen his brother with) about Harmoush’s whereabouts.

“He told me he knew nothing about him and that he left him 10 minutes after they had met.”

The Guardian ran an earlier story about Turkey’s possible involvement in Harmoush’s abduction and quoted Lebanese human rights activist Wessam Tarif as saying that Turkey handed Harmoush to Syria in return for nine members of the Kurdistan Workers’ Party.