Palestinian statehood: can the UN vote be more than just symbolic recognition? 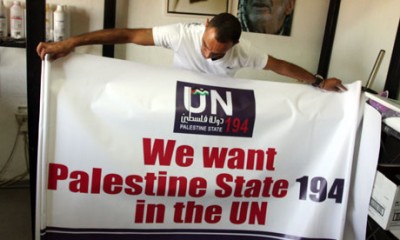 The United Nations has staked out landmark positions many times on the question of Palestine, but the current attempt to secure recognition for Palestinian statehood has powerful echoes of one its most significant past decisions – the partition of the country into separate Jewish and Arab states in November 1947.

That vote by the UN general assembly was necessitated by Britain’s desire to shed responsibility for the then mandated territory. Hailed by the Jews but fatefully rejected by the Arabs, the move signalled the start of fighting before the establishment of Israel and the flight of the Palestinian refugees – the “Nakba” – the following year.

Both sides are thus sharply aware of the historical resonance of next week’s UN bid. Ehud Barak, Israel’s defence minister, has warned of a “diplomatic tsunami”. But others predict a damp squib. In this view, the manoeuvring seems unlikely to deliver more than symbolic recognition of an already widely recognised right. But that may be underestimating the impact. And surprises cannot be ruled out.

In a new report, the International Crisis Group describes the path to the UN as “a tale of collective mismanagement”. It blames Palestinian leaders “plagued by ignorance, internal divisions and brinkmanship for overselling what they could achieve and scrambling to avoid further loss of domestic credibility”.

Israel, it warns, is over-dramatising the impact of UN recognition and has threatened to retaliate against the Palestinians. “The US administration, unable to steer events, fed up with both sides, and facing a Congress that will inflict a price for any Palestinian move at the UN, just wants the whole thing to go away. It is pressing instead for a resumption of negotiations which, in the current context, are likely to collapse – making it a cure more hazardous than the ailment.”

On the Palestinian side, the drive for recognition flows from a sense that the moribund “peace process” – never more deserving of those quotation marks than now – helps maintain a status quo that allows the relentless expansion of Israeli settlements in the West Bank and East Jerusalem. Earlier this year the “Palestine papers” published by the Guardian exposed the yawning gap between the two sides.

Supporters of Mahmoud Abbas, the Palestinian president, argue that even if a threatened US veto means that the effort will produce nothing more than observer status at the UN – akin to that of the Vatican – Palestinians will still gain access to organisations such as the international criminal court at The Hague and be able to use them to fight the occupation and its abuses – “lawfare” rather than warfare.

But a powerful counter-argument on the Palestinian side, where there is growing disillusionment with the two-state solution, is that this is a distraction from the real business of resisting Israel. That strategy envisages a struggle for civil rights on both sides of the old 1967 border with the distant goal of somehow achieving one single democratic state for Arabs and Jews.

The truth is that no solution at all is likely as long as Israel’s Likud-led government refuses to accept the establishment of an independent Palestinian state within the 1967 borders. And Abbas still faces opposition from Hamas, the Islamist movement that controls Gaza and opposes both negotiations with Israel and the struggle for UN recognition because it believes “that rights are grabbed and not begged for”.

Israeli “doves” see one big positive. “Abbas is effectively agreeing to a partial settlement of his final status claims that could be highly advantageous for the cause of a stable two-state solution,” wrote analyst Yossi Alpher at Bitterlemons.org.

“Abbas is asking the UN for a territorial solution: a Palestinian state based on the 1967 lines with its capital in Jerusalem. He is not asking the UN to rule on the right of return or the ‘ownership’ of the Temple Mount/Haram al-Sharif in Jerusalem – the real ‘dealbreakers’ when the two parties sit down to direct negotiations.” Those advantages are seen as disadvantages by many Palestinians.

With the seismic changes of the Arab spring and Israel’s spats with Egypt and Turkey in the background, this is a potentially significant moment. The two big questions are whether international recognition of a Palestinian state will make substantive and successful negotiations any more likely; and whether a UN decision – like that one back in 1947 and so many others since – will be rendered irrelevant by events and facts on the ground.