Qanso: No solid proof that Future movement is interfering in Syria 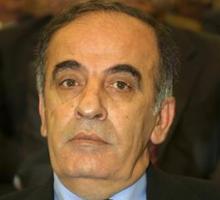 Minister of State Ali Qanso said on Friday evening that there is insufficient data to prove that the Future Movement is “interfering” in current Syrian events.

Qanso , leader of the Syrian Social Nationalist Party and a staunch ally of Syria told Hezbollah’s Al-Manar television that the Syrian regime will not fall, and added that most of the Syrian people still support President Bashar al-Assad.

“The more the regime fights to [eliminate] the presence of armed groups, the more will people trust it.”

He added that Syria must be “rescued from the destructive scheme targeting it,” and rejected calls on western countries to protect Syria.

“If the Syrian opposition wants safety and stability, then all it has to do is confront the armed groups.”

The U.S. Embassy in Syria said last Tuesday that President Bashar Assad is not fooling anyone by blaming terrorists and thugs for the unrest in his country as security forces try to crush the uprising by unleashing a brutal crackdown that has killed more than 2,200 people in nearly six months.

In comments posted on the embassy’s Facebook page, U.S. Ambassador Robert Ford said it was clear Assad’s regime has no capacity for reform.

Ford acknowledged that security forces have been killed. The regime estimates around 400 have died.

“But the number of security service members killed is far, far lower than the number of unarmed civilians killed,” he said. “No one in the international community accepts the justification from the Syrian government that those security service members’ deaths justify the daily killings, beatings, extrajudicial detentions, torture and harassment of unarmed civilian protesters.” He added