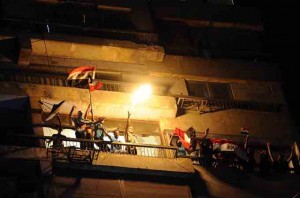 Israel’s ambassador to Egypt and senior staff have been evacuated home after protesters stormed a building containing the country’s embassy in Cairo on Friday night.

Israel Radio said on Saturday that the plane carrying Yitzhak Levanon, the ambassador, and others had landed in Israel.

Israel’s consul for state affairs was left behind to maintain its embassy, as Israel weighed its response to the attack by dozens of protesters on the building that houses its diplomatic mission.

The AFP news agency reported that Egyptian commandos had entered the embassy building as it was attacked by protesters to escort six Israeli citizens to safety.

US President Barack Obama earlier called on Egypt to “honour its international obligations” to protect the diplomats and told Benjamin Netanyahu, the Israeli prime minister, that Washington was taking steps to resolve the situation.

Hillary Clinton, the US secretary of state, also spoke with Mohamed Kamel Amr, the Egyptian foreign minister, who cut short a trip to Poland as Essam Sharaf, the Egyptian prime minister, called a crisis cabinet meeting.

An Israeli government official who wanted to remain anonymous told the Al Jazeera bureau in Jerusalem that Israel was grateful to Obama and Egyptian government for helping to resolve the situation.

But it said the incident was a blow to Israeli-Egyptian relations and a “serious violation of accepted diplomatic behavior”.

“This could have been a real tragedy, We are thankful to all who helped resolve this matter. Over the last few hours there was a real concern for the lives of our people,” said the government official.

Pulling its diplomats even temporarily out of Egypt would represent another regional setback for Israel which has already seen relations with Turkey, another erstwhile regional ally, turn sour amid Turkish anger over last year’s deadly raid by Israeli commandos on a Gaza-bound flotilla .

The Israeli embassy has been a focus for protests in Cairo amid a downturn in relations since Hosni Mubarak, the former Egyptian president, was ousted from power in February.