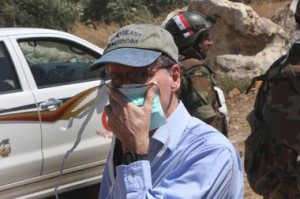 The U.S. ambassador to Syria called into question Tuesday the Syrian government’s capability to enact “the deep, genuine and credible reforms” demanded by opposition protesters.

In a sharply worded letter posted on the U.S. Embassy Facebook page, Robert Ford voiced his support for what he called the “courage” shown by demonstrators and slammed the killings of unarmed civilians protesting peacefully.

“Given the extent of the government’s brutality, neither the Syrian protest movement nor the international community will believe that this Syrian leadership desires or is capable of the deep, genuine and credible reforms that the Syrian people demand,” Ford wrote.

Syria has been engulfed in public protest for months, and the regime has been accused internationally of a crackdown on peaceful demonstrators.

The government has maintained it is targeting armed terrorists. But opposition activists say it is a systematic, sustained slaughter.

“Peaceful protesters are not ‘terrorists,’ ” Ford wrote, “and after all the evidence accumulated over the past six months, no one except the Syrian government and its supporters believes that the peaceful protesters here are.”

He also struck down the Syrian government’s argument that civilian deaths are a result of violence against Syrian security forces, noting that “the number of security service members killed is far, far lower than the number of unarmed civilians killed.”

“No one in the international community accepts the justification from the Syrian government that those security service members’ deaths justify the daily killings, beatings, extrajudicial detentions, torture and harassment of unarmed civilian protesters,” he said.

Ford sparked a diplomatic firestorm in July when he traveled to the restive city of Hama to express support for demonstrators and was welcomed with flowers by local residents who had suffered a brutal crackdown by government forces. Syrian President Bashar al-Assad’s government called the trip an attempt to foment dissent.

Ford concluded his note Tuesday with this: “This isn’t about Western military intervention. This isn’t about oil (many governments have banned its import). This isn’t about Israel or the West wanting to dominate the Arab world (an old, discredited government line). This is about basic political freedoms from the United Nations’ Human Rights Charter — signed by Syria, don’t forget — which calls for freedom of speech and freedom of peaceful assembly. And the United States wholly supports Syrians’ rights to exercise those freedoms.”