Geagea: The Syrian regime is finished 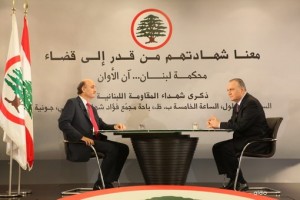 In an interview with MTV on Monday night Lebanese Forces leader Samir Geagea predicted that the popular uprising that has been raging for more than five months in Syria will bring down the regime of Syrian president Basher al Assad .

“The course of developments in Syria has become clear. The collapse of the regime is inevitable “ Geagea said in his interview with Walid Abboud adding : “In my view, the Syrian regime is finished.”

Geagea also said that even if Assad bowed to long-standing Western demands to sever Syria’s strategic alliance with Iran, this would not help to save him any longer.

Geagea criticized the theory that says if Assad is ousted, Syria could sink into a full-blown civil war. “Indications in Syria are headed toward decisiveness rather than toward a civil war,” he said.

Geagea also criticized the theory that says the Assad regime is a guarantee for the Christians in Syria and Lebanon against the threat of the rise of Muslim fundamentalists.

“The Christian presence in the region does not rely on the current regimes,” he said, adding: “If fundamentalist regimes took over power, we will oppose them , just as we have opposed some current regimes.”

“If the presence of Christians depended on dictatorial regimes, this means we do not exist. If we wanted to rely on these regimes, this would falsify what we believe in. Then, why should the Christians be present in the Orient?” Geagea asked.

Geagea called on Hezbollah ( which continues to be very supportive of the Syrian regime) to dismantle its military and security operations and to focus only on its a political party before it is too late , “for its own sake and the sake of Lebanon” stressing that the regional formula – a reference to Syria’s influence in the region and its strong support for Hezbollah , no longer exists

“Hezbollah’s position at the strategic level is different today. I want to send an extremely honest message to Hezbollah officials: In 1990, Hezbollah was the fourth or fifth militia in Lebanon. Certain circumstances led to the surge of Hezbollah … This formula is on its way out,” he said, as a result of the new realities in Syria and the region

“Hezbollah can no longer be as it is today. As a political group, we will carry it on our shoulders because we as Lebanese have to live together. But as a military and security organization, it cannot continue to exist,” he said, adding: “Hezbollah is required to take a major strategic decision … It has to renounce its military and security arms and turn into a political party in order to see how we can build the country.”

Geagea said if Hezbollah took that decision, it would be “a heroic act .” However, he warned that if Hezbollah did not take such a decision, this would be very costly for the country.

Geagea predicted that the collapse of the Assad regime would not lead to the fall of Hezbollah in Lebanon. “When the Syrian regime falls, a part of Syria’s Lebanese allies will rally around Hezbollah”, he said.

Commenting on the relations between March 14 alliance and the army Geagea said : “The army is our only choice”