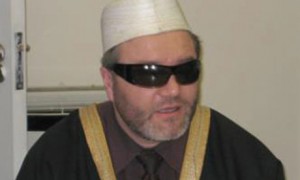 Detectives are searching for the motive that led to the killing of a blind Lebanese imam inside a mosque in north London.

Maimoun Zarzour, 39, an imam at Muslim Welfare House in Finsbury Park, north London, was found dead in his office at the mosque on Friday morning .

Shortly after Zarzour’s body was found, a man gave himself up to police and is the prime suspect. He is believed to be Muslim, and to have asked for an appointment to see Zarzour after early morning prayers, suggesting that he was known at the mosque.

Muslim Welfare House is one of two mosques in the Finsbury Park area. It is moderate and orchestrated the ousting of the firebrand Abu Hamza, who is now in jail.

Worshippers at the mosque, which is known for reaching out to other faiths, had celebrated Eid on Tuesday, one of the biggest Muslim festivals of the year.

A former mosque trustee, Mohamad Kozbar, paid tribute to Zarzour. “He was a well known imam, humble and kind,” he said. “To be killed in this way is a crime, and the person or people who did this should be brought to justice.”

Abdul Abdi, the project manager for Muslim Welfare House, which runs the mosque, said: “It’s tough for the community. He was someone who was dedicated and worked more than his scheduled hours. He accepted anyone to his office at any time, even if it wasn’t a convenient time.

“He was friendly and a man who united the community in this area. During his short time here he became well known and respected.”

In a statement the Metropolitan police said: “Police were called by London ambulance service at 1021hrs on Friday 2 September to reports of a man seriously injured at an Islamic bookshop and welfare centre in Seven Sisters Road.

“Police officers attended. A man – believed to be aged in his 30s – was pronounced dead at the scene. We await formal identification and confirmation that next of kin have been informed. A postmortem examination is yet to be arranged.

“A man – age not known at this stage – was arrested at the scene on suspicion of murder.

“Islington police officers are investigating alongside colleagues from the homicide and serious crime command.”