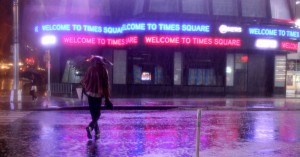 Hurricane Irene made its second landfall, this one early Sunday in southern New Jersey, as the storm continued its relentless push toward New York City.

Though the storm weakened as it moved up the Eastern Seaboard, it continued to funnel storm surge and flood water to the Jersey shore overnight, where the National Hurricane Center said the center of the storm crossed over land near Little Egg Inlet around 5:35 a.m., which is north of Atlantic City. The storm’s maximum sustained winds are estimated to be 75 miles per hour, making it a weak category one hurricane.

New York was the next major city in the hurricane’s path and for much of the night, the metropolitian area was pounded with heavy rain and wind, causing power failures and flooding.

While New York had all but closed down in anticipation of what forecasters warned could be violent winds with the force to drive a wall of water over the beaches in the Rockaways and between the skyscrapers of Lower Manhattan, as of early Sunday morning, all bridges and tunnels remained open, with the exception of the lower level of the George Washington Bridge because of high winds, said Steve Coleman, a spokesman for the Port Authority of New York and New Jersey.

Forecasters said the relentless rain from the slow-moving storm made it very dangerous.

“Even though they are saying that the storm is quote-on-quote weakening, hurricane winds are hurricane winds,” John Searing, the deputy commissioner of the Suffolk County Department of Fire, Rescue and Emergency Services, said before daybreak Sunday as he prepared to deal with the damage. “Whether they say its 80 miles or 75 miles an hour, what’s the physical difference in that?”

City officials warned that a big problem could be flooding at high tide, at about 8 a.m. Sunday — before the storm has moved on and the wind has slacked off. The storm is expected to pass through by Sunday afternoon, moving into Southern New England.

“That is when you’ll see the water come over the side,” Mr. Bloomberg cautioned Saturday afternoon.

In its latest forecast, the National Hurricane Center warned that “water levels have been rising rapidly in advance of the center of Irene.” At 5 a.m., the center reported the storm surge of 3.1 feet at Cape May, N.J., 3.8 feet in Sandy Hook, N.J., and 3.9 feet in New York Harbor.

On the Jackie Robinson Parkway, three feet of water blocked all lanes, state and city officials reported. Floodwaters diverted traffic on the Verrazano Bridge and shut the southbound F.D.R. drive at 116th Street. The Union Turnpike ramp on the Grand Central Parkway was shut and on the Cross Bronx Expressway, the rising waters blocked the exit at White Plains Road.

“The number of outages continues to climb as Hurricane Irene moves north,” the New Jersey utility said in a statement on its Web site.

Since Friday, the city had done more than issue warnings. The subway system, one of the city’s trademarks, had shut down in the middle of the day on Saturday, and firefighters and social service workers had spent much of Saturday trying to complete the evacuation of about 370,000 residents in low-lying areas where officials expected flooding to follow the storm. In New Jersey, Gov. Chris Christie said that more than a million people had been evacuated, mainly from four counties in the southern part of the state.

The storm, a wide and relentless mass that had had lurched onto the Outer Banks of North Carolina in the early daylight hours of Saturday, heaved clumsily but implacably north, leaving in its wake at least nine deaths. After crawling slowly from North Carolina into Virginia, the storm weaved out to sea and onto a path that forecasters said would take it to Long Island and New York City.

The storm was a spinning kaleidoscope of weather, sometimes pounding windows with rain, sometimes flashing the sky with lightning, sometimes blacking out the horizon with ominous, low-riding clouds. As the hurricane moved up the East Coast, tornado watches had moved right along with it, and that lockstep continued as the storm closed in on the New York area: early Sunday, the National Weather Service announced a tornado watch for the city, along with Westchester, Suffolk, Nassau and Rockland Counties. “It’s actually common when we have these tropical systems,” said Brian Ceimnecki, a meteorologist with the Weather Service.

The Nassau County executive, Edward P. Mangano, said that “thousands” of people were spending the night in county facilities, including Nassau County Community College. He asked people in areas that were in danger to stay with friends or relatives, if possible.

The city opened 78 emergency shelters that could take in 70,000 people. But officials said that only 8,700 had arrived by 11 p.m. on Saturday. The only other statistics available pointed to the difficulty of getting people to abide by the mayor’s mandatory evacuation order in what the city calls Zone A low-lying areas: The mayor had said several hours earlier that 80 percent of the residents in some city-run buildings — but only 50 percent in others — had left.

Gov. Andrew M. Cuomo ordered 2,000 National Guard troops called up. Mr. Cuomo saw the first of them off from the 69th Regiment Armory, on Lexington Avenue at 26th Street, after saying they would assist the police, the Metropolitan Transportation Authority and the Port Authority of New York and New Jersey. He also said that some would be sent to Long Island, which could face heavy damage in the storm.

The mayor attributed one casualty to the storm, a 66-year-old man who fell from a ladder while trying to board up windows at his house in Jamaica, Queens, early in the day. A Fire Department spokesman said the man, who was not immediately identified, was in serious condition at Jamaica Hospital Medical Center.

The mayor said police rescuers had pulled two kayakers from the water off Staten Island after their boats capsized. “When they were out there in spite of all the warnings, I don’t know,” the mayor said at his late-evening briefing, adding that they had been “kept afloat by lifejackets” they were wearing. He said they had been given summonses.

He also said that going out in the water as the storm approached was a “reckless” move that had “diverted badly-needed N.Y.P.D. resources.”

The city’s beaches were closed, and at midday, as the transit system prepared to shut down, police officers sounded the warning, strolling along subway platforms and telling people that the next train would be the last. The conductor of a No. 4 train that pulled into the Borough Hall station in Brooklyn at 12:14 p.m. had the same message.

Soon subway employees were stretching yellow tape across the entrances to stations to keep people from going down the steps and into a subterranean world that was suddenly off limits, but not deserted. Transit workers were charged with executing a huge, mostly underground ballet, moving 200 subway trains away from outdoor yards that could flood if the storm delivered the 6 to 12 inches of rain that forecasts called for. The trains were to be parked in tunnels across the city, making regular runs impossible.

Mr. Bloomberg said the transit system was “unlikely to be back” in service on Monday. He said crews would have to pump water from tunnels if they flooded and restore the signal system before they could move the parked trains out. That would mean “the equipment’s not where you would want it” for the morning rush, he said. “Plan on a commute without mass transit on Monday morning.”

Mr. Bloomberg also said electricity could be knocked out in Lower Manhattan if Consolidated Edison shut off the power to pre-empt the problems that flooding could cause for its cables. (A Con Ed spokesman said later that the company, while prepared, had no immediate plans for that kind of shutdown.)

Other officials, including Mr. Christie, repeated what they had said on Friday: Evacuate.

Mr. Christie said that 90 percent to 98 percent of residents in parts of four counties in South Jersey had left — Cape May, Atlantic, Ocean and Monmouth. About 1,200 people who were evacuated from Atlantic County on Friday had spent the night without cots at the Sun Center arena in Trenton, where many people ended up sleeping in seats, he said. They were taken to the Rutgers University campus in New Brunswick, which Mr. Christie visited after a news conference.

In New York, Mr. Bloomberg said the evacuation and the transit shutdown, actions that he said had not been ordered before, had gone as well as could be expected. Officials went door to door in high-rise housing projects and firefighters drove school buses to help get homebound residents out of low-lying neighborhoods.

But, for all the evacuation, some people had to stay put. The city did not evacuate inmates on Rikers Island because, a city spokesman explained, “It’s not in Zone A.”

The storm caused major disruptions long before the first bands of rain swirled by. The three major airports in the New York region stopped clearing flights for landing at noon. Officials said they would remain open for planes that wanted to take off, but most flights had been canceled on Friday, according to Steve Coleman, a spokesman for the Port Authority.

Amtrak canceled most trains after 11 a.m., although there was some confusion at Pennsylvania Station. A northbound train that left at 10:15 a.m. was, the conductor said, the last one going in that direction and was sold out.

The storm’s potential path reminded weather historians of the devastating hurricane of 1938. That storm devastated the Connecticut coast and rearranged Long Island’s geography, carving an inlet through what had been a thin but solid stretch of land on the way to the Hamptons.

On Saturday, New York awoke to an odd, greenish-gray sky, overheated air that felt heavy with moisture and only a light, summery breeze. It was not just another sleepy Saturday in August — too many people were on alert too early. In Battery Park City, long lines of taxis waited to take evacuees who carried their possessions to the curb. Uptown, some were dismayed when they found that stores like the new Fairway on East 86th Street had closed.

“It fits into the whole alarmist nature of the city,” said Mike Ortenau, 44, who lives in the neighborhood.