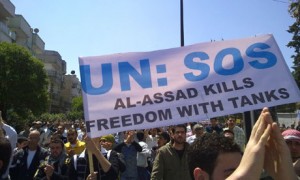 The Syrian government’s attempts to whitewash evidence of a brutal crackdown on the country’s five-month uprising appeared to backfire on Monday after a visiting UN humanitarian delegation was met by protesters waving SOS signs.

Hundreds of demonstrators in Homs, which has had tanks on the streets and snipers on the roofs for weeks, surrounded the UN car in the central New Clock square, shouting for the overthrow of the regime and holding up the signs, according to video footage and local residents.

Crowds there and in several other cities have been emboldened by signs of an imminent victory for the rebels in Libya after six months of a Nato-backed offensive against the regime of Muammar Gaddafi. Syrian messages of congratulations and messages to president Bashar al-Assad that he will be next have been circulating online.

A woman in Homs said: “Libya has given us encouragement. But the international community needs to know what has been happening here. What is being reported only scratches the surface.”

The jubilation at the Libyan rebels’ gains eclipsed a televised interview with a defiant Assad on Sunday in which he threatened “intolerable” consequences for the international community if it intervenes in Syria and suggested force would continue to be used against an “increasingly militant” opposition.

With the success of the Nato offensive in Libya, questions of similar action in Syria have inevitably been raised.

But the appetite among protesters or in the international community for military action in Syria, which has links to numerous flashpoint conflicts in the region, is almost nonexistent.

Syria’s state news agency Sana said that Assad formed a committee to approve the formation of rivals to the ruling Ba’ath party in the runup to parliamentary elections early next year.

Human rights groups say more than 2,000 people have been killed in the crackdown since mid-March, with thousands detained and tortured.

The UN, which has been focusing on human rights infringements after its security council was unable to agree on a resolution, will demand that Syria allow a team to assess whether crimes against humanity have been committed, an official said after a special session on Monday.

Another UN official told the Guardian that the government had stuck to its promise to allow the delegation unfettered access to the country but residents from Homs said the mission missed a key neighbourhood of Khaldiyeh where the crackdown has been severe.

Nonetheless a western diplomat said it was “turning into an anti-government roadshow with the whole thing backfiring on the Syrians”.

The diplomat said people had flocked to the UN team to show the delegation signs of torture during a visit to Douma and Moadimiyeh.