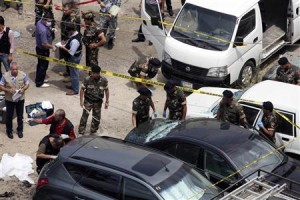 March 14 MP Boutros Harb said in an interview publish on Saturday that the cabinet should tell the Lebanese people the truth about Thursday’s Antelias explosion “since the published version of the story is unconvincing and creates more worries.”

Harb told Al-Jumhuriya newspaper that Interior Minister Marwan Charbel’s explanation that the two victims of the explosion had been engaged in a “personal scuffle” raises more questions than answers since the two dead men were not from Antelias.

Lebanese Forces MP Antoine Zahra, also told Al-Jumhuriya that the explosion marks the first time a security incident occurred where the identities of the perpetrators are known.

“It is unacceptable for the investigation not reach any clear, convincing and realistic results,” he added.

March 14 General Secretariat issued a statement on Friday condemning the government’s handling Thursday’s Antelias explosion and the blast in Dahiyeh at the end of July.

The statement added that Government Commissioner to the Military Court Judge Saqr Saqr’s decision to charge a third party for involvement in the Antelias explosion disputes the official statement of the cabinet on the issue, which called the incident a “personal scuffle.”

“This shows that the cabinet is purposely hiding the truth.”

March 14 also criticized the response of the higher defense council to the security developments and described it as “poor.”

Gemayel said he was not convinced the two men came to Antelias to resolve their personal disputes as some media outlets reported (Al Manar) , adding, “No one in Lebanon nowadays carries a gun on his waist band, let alone an explosive device.”

Gemayel told Al-Jumhuriya newspaper that “the explosion is related to the political affiliation of these men, especially because their parents confirmed that they had sent their sons to die as martyrs and not die on the streets.”

Gemayel also said that “the state failed again to protect the citizens against the arrogant behavior of Hezbollah, which does whatever it wants and plays with explosives.”

Government Commissioner to the Military Court Judge Saqr Saqr charged an unknown third party with collaborating in the preparation of the Antelias explosive alongside the two other men who died in the explosion.

Two men were killed in Antelias in a parking lot on Thursday when explosives they were handling detonated, causing a huge blast.

In a related development an anonymous security source said in remarks published by Al-Hayat newspaper Saturday that Interior Minister Marwan Charbel’s report on Thursday’s Antelias explosion was not based on a full investigation.

“ Charbel did not wait for the analysis of the evidence,” the source told the daily.

“On what evidence did Charbel base his position about a “personal scuffle” between the two victims ?” he asked.

The source also questioned why an official statement has not been released concerning the incident.

Two men were killed in Antelias in a parking lot on Thursday when explosives they were handling detonated, causing a huge blast.

The two are reportedly Hezbollah members from south Lebanon and lived in Dhahiya a southern suburb of Beirut , known as a Hezbollah stronghold

Photo: Security officers inspect the site where a hand grenade exploded near a judge”s car in the Antelias area, north of Beirut August 11, 2011.