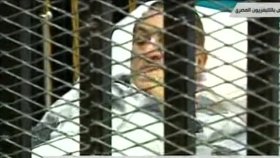 Egypt’s ex-President Hosni Mubarak has denied charges of corruption and ordering the killing of protesters, on the opening day of his trial in Cairo.

He was wheeled on a hospital bed into a cage in court to the astonishment of onlookers outside, correspondents say.

The 83-year-old is being tried with his sons, who also deny charges against them, ex-Interior Minister Habib al-Adly and six other former officials.

Mr Mubarak was forced from office by mass demonstrations in February.

The charge of ordering the killing of protesters carries the death penalty.

Some 3,000 soldiers and police were drafted in to maintain order at the police academy for the first day of the trial of Mr Mubarak and his sons, which has now been adjourned until 15 August. The trial of Mr al-Adly and the six other security officials is due to resume on Thursday.

Mr Mubarak’s trial was originally going to be held in a Cairo convention centre but the authorities moved the venue to a temporary courtroom set up inside the academy because of security concerns.

An estimated 600 people are thought to be watching the proceedings in and outside the courtroom, with millions more watching on TV.

Up until the last moment there was doubt whether Mr Mubarak would actually appear in the court, say correspondents.

His defence team claim he is seriously ill and there was speculation they might negotiate for him to remain in the hospital wing of the police academy while the proceedings took place in the courtroom.

But Mr Mubarak was wheeled into the cage from where he observed proceedings with the other defendants, including his two sons Alaa and Gamal.

Judge Ahmed Rifaat opened the session by asking for order, saying “the civilised Egyptian people require calm… to make sure that the mission of the court is carried out fully so we can please God almighty and our consciences”.

Despite that, the court session was at times unruly, with lawyers jostling and clamouring to be heard by the judge.

The charges against the Mubaraks were read out, and Hosni Mubarak and his sons each denied them.

“Yes, I am here,” the former president said, raising his hand slightly when the judge asked him to identify himself and enter a plea. “I deny all these accusations completely.”

Earlier, defence lawyers said they needed a delay to proceedings to consider 4,000 pages of evidence. There has been speculation that the case will be adjourned, although the judge has been previously quoted as vowing that the trial would proceed speedily.

Everybody was in shock as the trial began, says the BBC’s Jon Leyne, in Cairo, because this was the moment that no-one in Egypt – maybe all of the Middle East – expected to see.

There was amazement and silence from the people gathered outside as they watched a screen broadcasting proceedings, our correspondent says.

“I am delighted that I see them in a cage. I feel that my son’s soul is finally starting to be at rest and that his blood will cool,” Saeeda Hassan Abdul Raouf, the mother of a 22-year-old protester who was among those killed in the uprising, told the Associated Press outside the trial venue.

One of the protest leaders, film-maker Ahmed Rasheed, told the BBC that across Cairo people had gathered around television screens in shopping malls and shops, watching and arguing as the trial was broadcast.

“I was quite overwhelmed to see the scene taking place, I was very pessimistic about this. I didn’t believe he was going to show up in court.”

Earlier, scuffles broke out between hundreds of supporters and opponents of the ex-president, with hundreds of white-clad police and riot police with shields and helmets intervening to separate demonstrators hurling stones and bottles at each other.

Mr Mubarak was flown to Cairo from hospital in the coastal resort town of Sharm el-Sheikh, where he had been detained and receiving treatment since April for a heart condition.

The former Egyptian leader resigned on 11 February, after 18 days of protests in Cairo’s Tahrir Square, in which some 850 people were killed.

Mr Mubarak’s lawyer insists the former president is seriously ill. Our correspondent says many Egyptians are sceptical about this.

An official quoted by the state news agency, Mena, said Mr Mubarak would stay at a hospital within the police academy compound during the trial to ensure he could attend the sessions.

Over the past month there have been renewed sit-in protests in Tahrir Square by people angry with the slow pace of change in the country.

Among their demands to the military council in charge has been the call for speedier trial for former regime officials.

On Monday and Tuesday, police backed by army troops moved in to clear the last few protesters from square.

The former Interior Minister, Mr Adly, has already been sentenced to 12 years in jail for money-laundering and profiteering.