US official: ‘Iraq more dangerous now than a year ago’ 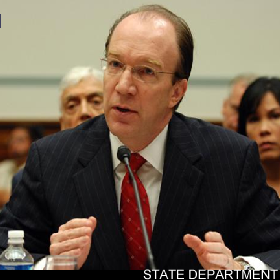 Washington, July 31: Iraq is more dangerous now than it was a year ago, an official US government assessment has said.

Stuart W Bowen Jr, the US special inspector general for Iraq Reconstruction, said that frequent bombings, assassinations and a resurgence in Shia militia violence are the root causes of the country becoming a more ‘dangerous place to work’.

“Iraq remains an extraordinarily dangerous place to work. It is less safe, in my judgment, than 12 months ago,” the Scotsman quoted Bowen, as saying in his 172-page quarterly report to Congress and president Barack Obama.

The report cited the deaths of 15 US soldiers in June, the bloodiest month for the US military in Iraq in two years.

It also noted an increase in rocket attacks on the Green Zone in Baghdad, where government offices and embassies are located, and also regular assassination attempts against Iraqi political leaders, security forces and judges.

The report also said the north-eastern province of Diyala, which borders Iran and has an often volatile mix of Sunni and Shia Muslims and Kurds among its residents, was “very unstable” with frequent bombings that bring double-digit death tolls.

Bowen accused the US military of covering up the situation in Iraq, as it was stated in May that Iraq’s security trends was “very, very positive”. Bowen instead, described ‘a very fragile’ situation of national security in Iraq.