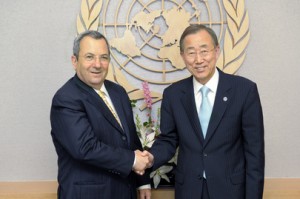 After Israeli Defense Minister Ehud Barak met with UN Secretary General Ban Ki-moon on Friday, he told the Press he had discussed “the region.” Inner City Press asked him, “Did you discuss Syria with the Secretary General?”

Barak replied, “I mentioned the fact that we are watching it. We do not intend to be an influence on what happens there… We cannot ignore, what we see there is illegitimate behavior — Assad if using weapons and his armed forces against his own citizens in a way that’s caused the loss of two thousand lives. I believe he has lost his legitimacy.”

Israel, or most Israeli politicians and diplomats, have tried to say little about Syria, thinking that to attack Assad would only help him domestically. But Barak has gone further.

Asked about the Palmer report on the nine Turks killed on last year’s Gaza flotilla, Barak said it is mostly the fault of the IHH, but he hopes something can be agreed between now and August 20.

While Barak did not say it about the Palestinians’ possible moves in September, a long time Permanent Representative gushed to Inner City Press that even with a US veto in the Security Council that could block UN membership, Palestine could ask for statehood, or what could be called statehood, in the General Assembly.