Aoun: Lebanon needs a refund on the Tribunal 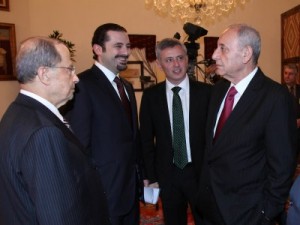 MP Michel Aoun said Lebanon should be “repaid the funding” it provided to the UN-backed tribunal investigating the 2005 assassination of former Prime Minister Rafik Hariri. Meanwhile, March 14 called on United Nations Secretary General Ban Ki-Moon and the Arab League to maintain their support for the Special Tribunal for Lebanon “until justice is achieved.”

The Change and Reform bloc leader said on Tuesday that he is not bound to follow any request made by the United Nations regarding the Special Tribunal for Lebanon (STL).

He also said that the national dialogue should tackle the national defense strategy, adding that the issue of Hezbollah’s arms is “being politicized.”

The UN-backed STL indicted four members of Hezbollah in connection to Rafik Hariri’s murder, but the Shia group ruled out their arrest.