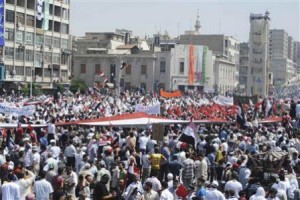 Five civilians were killed overnight in Homs, 165 km (100 miles) north of the capital Damascus, when tanks were deployed to halt protests in the besieged city, residents said.

Six more people were later shot dead in protests in the Damascus suburb of Mleeha, in Homs and in the Idlib area in the northwest, the Syrian Observatory for Human Rights and the National Organization for Human Rights said.

“So far we have six martyrs across the country. All six were killed today,” said Ammar Qurabi, head of the National Organization for Human Rights.

The 4-month-old uprising, mirroring unrest and dissent elsewhere in the Middle East and North Africa, is the biggest challenge to Assad’s authority since he succeeded his father 11 years ago and it is spreading.

Rights groups say Assad’s forces have killed more than 1,400 civilians since the uprising began. U.N. human rights advisers said on Friday the crackdown might amount to crimes against humanity.

Activists reported protests after Friday prayers in several places — the Medan district of Damascus, Latakia on the coast, Deraa in the south and Deir al-Zor in the east — as well as Homs, the latest focus of the armed crackdown.

“Tanks and armored vehicles have deployed in Homs thoroughfares but in every street adjacent to them there are people in the streets,” a resident of Homs, who gave his name as Osama, said by telephone.

Once confined to outlying towns and rural regions, the uprising has now taken a firm hold in cities such as Homs and Hama, scene of a 1982 massacre by the military.

In the first crackdown on Kurds since the uprising began, dozens of people were wounded when police and militia used batons and teargas against protesters in the mainly Kurdish northeastern city of Qamishli, witnesses said.

The protesters demanded political freedoms and an end to state-endorsed discrimination against Syria’s 1 million Kurds. They also voiced solidarity with the protesters elsewhere.

Assad, 45, has described the uprising as a foreign conspiracy intended to sow sectarian strife.

Opponents say he has played on sectarian fears to maintain support of the minority Alawite sect and keep power for his family, which has ruled Syria for 41 years.

“The scale and gravity of the violations indicate a serious possibility that crimes against humanity may have been committed and continue to be committed in Syria,” Francis Deng, adviser on prevention of genocide, and Edward Luck, adviser on the responsibility to protect, said on Friday.

Once courted by the West to break Syria’s alliance with Iran and militant groups, Assad is becoming increasingly isolated internationally. Iran’s Shi’ite clerical rulers are maintaining their support, to the disquiet of Syria’s majority Sunnis.

Rights groups say the killings of civilians are causing a backlash against Assad among the mostly Sunni rank and file in the army.

Activists say several tank crews defected this week and joined protesters in the eastern town of Albu Kamal bordering Iraq’s tribal Sunni heartland, prompting the deployment of Alawite forces who surrounded the town and demanded the army defectors be handed over.

Diplomatic pressure on Assad mounted this week after Qatar, previously a supporter, shut its embassy in Damascus and the European Union said it was considering tougher sanctions.

Relations with Qatar deteriorated when Sunni Muslims were among those killed by Assad’s security forces, whose leaders, like the president, are Alawites.

Assistant U.S. Secretary of State Jeff Feltman told U.S. based Al Hurra TV that fear of a sectarian crisis was being instigated by Assad to sow fear among the population.

“They are trying to raise the specter of the ghost of a civil war but it’s clear from the majority of demonstrations that everyone is protesting without concern about the dangers confronting them for the sake of a better future for Syria,” Feltman said.