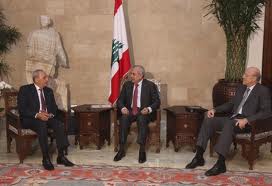 The PM also tackled the matter of Lebanon’s defense strategy, saying that “we should work on adopting a defense strategy based on giving the state priority to defend the country.”

“The government is working on drafting a law concerning maritime borders delimitation and will take this issue up with competent authorities,” National News Agency quoted him as saying.

Mikati gave priority to domestic issues, saying that there will be no tour in the Arab countries before these issues are solved.

Speaker Nabih Berri said on Monday that he supports President Michel Suleiman’s announcement that he would re-launch the national dialogue, stressing the importance of all-party talks to “avoid all kinds of problems and disputes.”

“I am ready to participate again in the national dialogue… it plays a major role in calming people down and renders communication between the various parties ,” Berri told As Safir newspaper.

Concerning the defense strategy issue , Berri expressed his belief that it was resolved through the formula of the army, people and resistance mentioned in the policy statement

March 14 leaders do not share the enthusiasm of the top three leaders for dialogue insisting that they will only want to attend a session that tackles the issue of non-state weapons, in reference to Hezbollah’s arms.

In May 2008 Hezbollah , which claims to be a resistance movement aimed at defending Lebanon against Israel pointed its guns against the Lebanese people when its gunmen invaded and occupied the western part of Beirut and tried but failed to occupy Mt Lebanon. 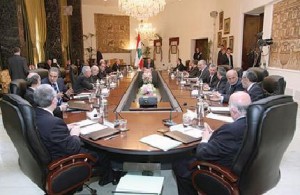 As Safir newspaper quoted well informed March 14 sources as saying on Monday that their previous experience with dialogue was bad over the non-implementation of any decision reached between the conferees, including the international tribunal, the disarmament of Palestinians outside camps and the demarcation of the border with Syria.

“There is no need for more ink on the paper,” the sources were quoted as saying . “The ball is now in the court of the president who should provide guarantees for a productive dialogue.”