Mikati: It is not in our hand to eliminate STL 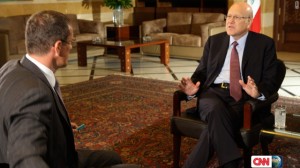 In his first foreign interview since announcing a new cabinet, Lebanon’s Prime Minister Najib Mikati speaks exclusively to CNN’s Richard Quest about a range of topics including Syria, the UN tribunal and more.

The headlines of the interview include:

– His confirmation that he will proceed with the UN’s Special Tribunal for Lebanon ( STL) l, and hand over those indicted if they are in Lebanon

– His dismissal of criticisms that Hezbollah allies would prevent his co-operating with UN tribunal.

– His wish for Pres Assad in Syria to introduce reform himself and his concern that events there do not reflect on Lebanon.

RICHARD QUEST, HOST: We need to, if we may, jump in with both feet, as they say, on questions of the tribunal and your government’s commitment to fully fund the process, the court, and the necessities that go around it. Are you prepared to say now, that your government will commit to it?

NAJIB MIKATI, LEBANESE PRIME MINISTER: We are going to proceed in this tribunal. It is not in our hand to eliminate of the (INAUDIBLE) tribunal by any means and we will proceed in this.

MIKATI: It is one of the issue and the protocol and we are going to follow this protocol as is.

QUEST: So then how do you square the circle with allies in your government who are determined that the commitments should not be fulfilled?

MIKATI: If you notice in the last few months, the last five, six months, the whole issue is – it’s calm, it’s quieted as indictment is issued and we show how we – the response was really in a very calm way –

MIKATI: But let us see what we can just – not to predict and forecast things. But I believe myself, wait and see. And that’s what we are planning to do. Whatever we can do from our side as the (INAUDIBLE) government, we are going to do it fully.

QUEST: But you can see why people see that you’re in a difficult position. One commentator in an English paper described you as dead man walking, which I thought was perhaps a little uncharitable.

MIKATI: If I’m still walking, I am not dead. So I have to still walk and run towards the benefit of Lebanon.

QUEST: But you can see why people say you’re in a difficult position.

QUEST: If we take what you say and we follow it to its logical conclusion, your government then will do everything it can to apprehend and hand over those who are indicted?

QUEST: I’m choosing my words carefully because I don’t wish to show any disrespect to you or to your office. But why, then, everybody I speak to here, why do they tell me no one will ever be handed over?

QUEST: Yes. If you ask people –

MIKATI: No. Are the four people, are they in Lebanon? That’s what we are trying to do. We are doing the most important as the government, they will do their best. All the officials and officers related to this issue, they are doing their job perfectly as I understand, as all reports coming to me, we are doing this in full manner.

QUEST: Syria. Let’s just turn to Syria, if we may at the moment, which, of course, is causing such concern internationally. Do you potentially see a role for yourself, since you are familiar and friendly with the president of Syria – do you see a role that you can play to perhaps, as an interlocutor, as a mediator to basically say, your time’s up?

MIKATI: My role today is to protect Lebanon. I don’t have to do anything with what’s happening in Syria. I cannot either change or do anything bad or good to the Syrian people and Syrian citizens. I respect what the Syrians, they do. I wish that President Assad can do the reform himself. But the most important is to create a kind of (INAUDIBLE) role of the any consequences of what happening in Syria to be reflecting on Lebanon.

QUEST: And if he can’t do the reforms himself?

MIKATI: I hope so. I wish – I wish the peace and good for the Syrian citizen and the Syrian regime.