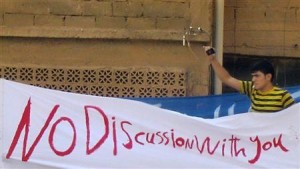 Syrian tanks surrounded a town near the border with Iraq’s Sunni heartland on Sunday after tens of thousands, emboldened by defections among security forces, took to the streets there denouncing President Bashar al-Assad, residents said.

Assad, from the minority Alawite sect, has sent troops in to towns across the country to try to end four months of protests against his rule. But activists say discontent is growing within the mostly Sunni army rank and file.

Killings, mostly carried out by ultra loyalist units, are leading to limited defections within the military, which is controlled by mostly Alawite officers who ultimately answer to Assad’s feared brother Maher, activists say.

Syria’s fractured opposition is also taking steps to unite, forming a 25-member National Salvation Council composed of Islamists, liberals and independents at a meeting in Istanbul on Saturday and agreeing to work toward a democratic vision.

More than 1,400 civilians have been killed since the protests began in March, human rights organizations say.

The killings drove thousands into the streets, overwhelming soldiers and secret police. Residents said around 100 Air Force Intelligence personnel and the crew of at least four armored vehicles joined the protesters.

“The protesters returned several army personnel carriers today as a sign of good will. The regime knows it will meet tough resistance if it attacks Albu Kamal, and that Iraqi tribes on the other side of the border will rush to help their brethren,” said one activist in the region, who declined to be named for fear of arrest.

Another activist said: “The whole of Albu Kamal went to the streets after the killings. Several armored personnel carriers moved into the center of the town to stop them, but ended joining sides with the human wave.”

POVERTY AND LACK OF INVESTMENT

Albu Kamal is on the eastern-most edge of the province of Deir al-Zor where hundreds of thousands protested on Friday.

The center of Syria’s 380,000 barrels per day of oil output, the region is still among the poorest in the country with little of the oil revenue invested in the area.

A water crisis in the last six years, which experts say is largely caused by mismanagement of resources and corruption, has also decimated agricultural production.

Authorities had forged alliances with several tribes in the region and allowed them to arm to counter the Kurdish minority living to the north, but those deals have broken down.

In the resort town of Zabadani, on the foothills of the Anti-Lebanon Mountain range, security forces and army units in armored personnel carriers raided houses overnight on Sunday and arrested 70 people, residents said.

“They shoved them into buses. The arrests were arbitrary. Many did not have anything to do with demonstrations. A disabled man and his 15-year-old son were taken away,” a doctor in Zabadai told Reuters by phone.

Syrian troops also arrested on Sunday the prominent writer Ali Abdallah, a fierce critic of the state’s use of violence.

“Ten soldiers entered my father’s house around 9:00 a.m. in the Damascus suburb of Qatana and took him. He just had heart surgery three weeks ago,” Abdallah’s son Mohammad told Reuters by phone from exile in Washington.

Abdallah, a 61-year-old secular thinker, was released in May after spending four years in prison because of his membership of the Damascus Declaration, a pro-democracy group of intellectuals and opposition figures, and his criticism of Assad’s alliance with Iran’s clerical rulers.