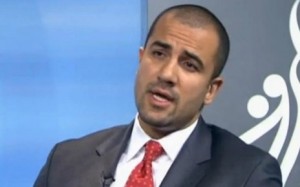 In a blast email sent to many from his address at the Syrian Embassy in Washington, D.C., spokesman Ahmed Salkini announced that he would be stepping down to accept “an exciting job offer in the private sector” in the D.C. area. In rather cryptic language, he noted, “I have been conspicuously silent since the beginning of the events in Syria, and at times, even unresponsive. For the latter, I apologize.” He also reflected on the pain he’d felt during the Syrian uprising:

I leave my position during the most difficult, yet promising of times in Syria’s modern history. I have been pained by every drop of Syrian blood lost. Still, I am certain of, and comforted by, the fact that Syria will emerge from this crisis more democratic, unified, freer, and stronger than ever.

Salkini , Salkini, who is also the political adviser of Syrian Ambassador to the US Imad Mustafa vigorously defended the Syrian government in the the U.S. media for several years.

Privately, Salkini admitted a few weeks ago that recent events made him think it was time to leave his position, though they were not the only reason. On Tuesday, he didn’t say if his resignation is solely in protest. His farewell email, however, reveals hints of his personal feelings about the uprising in Syria.

The Syrian Observatory for Human Rights says more than 1,500 civilians have been killed since the uprising began in mid-March and thousands have been wounded and arrested.