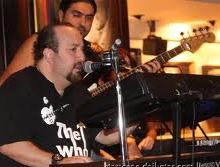 A serious dispute took place at the end of TV talent show program “Sing with Ghassan ” (Ghanni maa Ghassan) that is aired on new TV when one of the talent show participants , Assad Jaafar lost , prompting his father to threaten to kill Ghassan Rahbani and his father Elias Rahbani.

Ghassan Rahbani told New TV: “Jafar’s father called me and threatened to kill me and my father “adding he holds Asaad Jaafar responsible for any harm that happens to him or his dad

Ghassan Rahbani has released a total of 18 albums and 1 DVD box named the GRG Trilogy, 12 of the albums are under the name of GRG which stands for the ” Gassan Rahbani Group” .

Ghassan is a Pioneer of Heavy Metal music in Lebanon & the Middle East. He spent the first 10 years of his career exclusively producing,writing & composing this genre of music. Ghassan started his activities at the age of 15 by launching his first album (in English) followed by the second & third albums at the age of 16 as a solo artist.