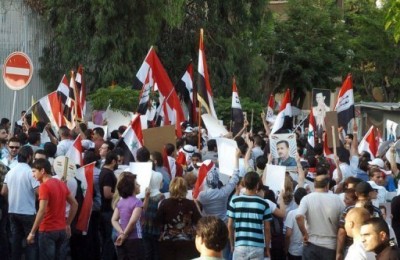 THE areas outside the American and French embassies in Damascus—blocks apart from each other and close to one of the president’s residence—were scenes of destruction on Monday evening. Black paint splattered the French mission. Glass from smashed car-windows and tomatoes littered the floor. “Fuck off America” had been scrawled in red on the wall of the American compound. The sign there now reads “The Embassy of T…”; the other letters were yanked down. One man, walking home, trailed a “T” behind him.

As security, police and numerous men in riot gear hung around on Monday morning, thuggish loyalists of embattled president Bashar al-Assad attacked both embassies and the residence of the American ambassador, Robert Ford. A handful breached the walls and tore down the Stars and Stripes to replace it with the Syrian flag. French security guards fired live shots in the air to disperse demonstrators who had taken a battering ram to the embassy.

If the Syrian regime hoped to provoke international outrage, it has done so. America has so far refrained from calling for Mr Assad’s ouster. There is little appetite, or capacity, for further interventions in the Middle East, particularly those of a military nature. But in a sharp escalation of rhetoric last night, the American secretary of state, Hillary Clinton, said Mr Assad had lost legitimacy. She said that the Syrian leader was not indispensable after the attacks on civilians.

France, which has already said Mr Assad’s rule is now illegitimate, condemned the attacks but said they would not detract attention from the killing, torture and arrests being carried out by the Syrian government.

The protests mainly played to a domestic audience after visits by Mr Ford and the French ambassador, Eric Chevallier, to Hama at the weekend caught the regime off guard. Rallying anti-western, especially anti-American, sentiment is an old trick that has worked for the government in the past. But after four months of protests and a violent crackdown, the authorities’ talk of resistance rings hollow. Many Syrians are embarrassed and outraged by the embassy attacks.

The regime has so far remained quiet about the incident. Few doubt it is responsible, despite its obligations to protect embassies. Thuggish gangs, some believed to be Alawites from the coastal areas, were bussed in. Al-Dounia, a pro-regime television channel, called for protests at embassies in the capital. Security forces, always quick to clamp down on those protesting against the regime, stood idly by.

As the attacks took place, a summit which government officials had hailed as the only way out of the crisis, promising a move to democracy, was held on the outskirts of Damascus. But with opposition groups boycotting the event, it is more of a regime pow-wow. They have much to discuss.