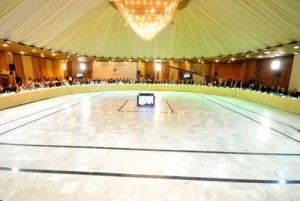 Syria’s main opposition groups boycotted talks on national dialogue on Sunday but Vice President Farouq al-Shara said the country, which is facing months of unrest, has no alternative to dialogue.

Sharaa was speaking at the start of a two-day conference aimed at setting the framework for national dialogue promised by President Bashar al-Assad, under pressure from protests calling for his departure and imposing the biggest challenge for his 11-year rule.

But the meeting was marred by the absence of main opposition figures and groups who rejected Assad’s call for dialogue and said they will not join any talks before the authorities put an end to a military crackdown and release thousands of political prisoners.

“At this time there is no alternative to dialogue. (The alternative) is bloodshed, economic bleeding and self destruction,” Sharaa told more than 200 participants, who included intellectuals, independent parliament members and less prominent opposition figures.

“National dialogue should continue and on all levels …in order to turn the page on the past and open a new page in the history of Syria,” he said.

Syria has imposed restrictions on media. The meeting was broadcasted live on Syrian television.

Inspired by the protests in Egypt and Tunisia which unseated its leaders, tens of thousands of Syrians took to the streets in March calling for more freedoms. The protests were also triggered by anger and frustration at corruption, poverty and lack of freedoms.

Assad responded to protests with a mixture of force and promises of reforms. He sent his troops and tanks to cities and towns to crush protests. Thousands of people were arrested.

He also took steps toward reforms, including granting citizenship to some ethnic Kurds, lifting a draconian state of emergency, freeing hundreds of prisoners and calling for a national dialogue.

Rights groups say more than 1,300 civilians have been killed in demonstrations and 12,000 people have been arrested since the start of the uprising. Authorities say more than 500 soldiers and police have died in clashes provoked by militant groups.

Western governments have condemned Assad’s violence against protesters, but their practical response has so far been limited to sanctions against top officials, a far cry from the military intervention against Muammar Gaddafi in Libya.

The two-day conference which started on Sunday is expected to discuss legislation which would allow a multi-party system and constitutional amendments but many activists and opposition figures say they refused to attend such a meeting because a national dialogue is not possible amid violence and a continued crackdown.

Nevertheless, many of the participants in the first session of Sunday’s meeting were vocal in calling for change and to putting an end to crackdown. Some called for an immediate abolishment of Article Eight of the constitution which puts the Baath Party at the center of Syrian politics and society.

“The way out is by putting an end to the security state …and to work for a civil and democratic country where there is political pluralism and media freedom and to end the one-party rule,” said Mohammad Habash, an independent member of parliament.

“Confronting protests with bullets is unacceptable to all. Also (we) reject all kinds of sanctions imposed by the United States and Europe,” he said.

He also called for the release of all prisoners.

The Baath Party has ruled Syria since it took power in a coup in 1963. Bashar’s father, President Hafez al-Assad, ruled the country with an iron fist for more than 30 years, crushing all voices against him.

Most veteran opposition figures have spent years in prison, some for up to 20 years, and many have been jailed several times.

When Bashar al-Assad assumed power after his father’s death in 2000 he promised a wide-ranging reforms, allowed a short-lived free speech forums and freed hundreds of political prisoners before cracking down on opponents and silencing opposition.