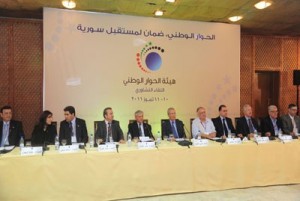 The Syrian government is holding a two-day meeting with members of the ruling Baath party and its opponents.

The government says the Damascus meeting will begin discussion of possible reforms, including multi-party elections and a new media law.

But many opposition leaders and protest organisers have refused to attend.

Rights groups estimate that more than 1,750 people, including 350 security personnel, have been killed as the government tries to quell the protests.

The government has blamed “armed criminal gangs” for the unrest, which began in mid-March as protests swept other nations in the Middle East and North Africa. 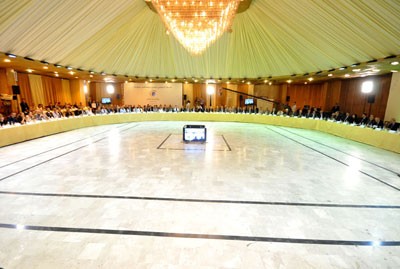 This initial meeting is due to last two days and set up a process, the time frame of which has not yet been established.

Vice-President Farouk al Shara opened the meeting, saying “we hope it will eventually lead to a comprehensive conference and the announcement of Syria’s transition into a pluralistic, democratic state, where all citizens are equal, and can take part in deciding the future of their country”.

When President Bashar al-Assad first announced the dialogue last month he said he wanted a comprehensive process that would deal with the different issues facing the Syrian people.

The credibility of the national dialogue process will depend to a large extent on which opposition figures participate, says the BBC’s Owen Bennett-Jones in Beirut.

Organisers of the protest movement gave the slogan No Dialogue Friday to the demonstrations two days ago.

Hundreds of thousands of people turned up for an anti-government rally in the central city of Hama on Friday, activists said, despite moves by security forces to quell demonstrations.

Meanwhile, the foreign ministry summoned the French and US ambassadors to Syria on Sunday to protest against a visit they made to Hama last week, Syrian media said.

At least 14 people were reportedly killed on Friday in protests around the country, including six in a Damascus suburb.

The question is whether the process of national dialogue is believable; whether it is going to happen, whether it has any credibility and whether it will take along the opposition with it.

It is quite clear that many of the people who actually represent those who are protesting are not turning up. They say they can’t do so as long as the government is killing and torturing people.

The president has said really quite big things in terms of the extent of the reform that’s on offer.

There is a history in Syria of all sorts of things being promised by the regime in terms of reform and then nothing actually materialises.

Clearly the people going out in the streets do not believe it will happen.