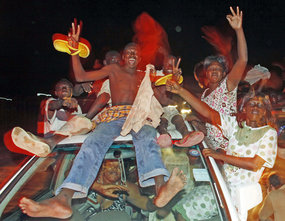 “We shall never, never surrender,” the crowd chanted, as people whistled and wiped tears from their eyes.

“I should cry for the recognition of this flag among the flags of the world,” shouted one tearful man.

“We have been denied our rights. Today, no more shall that happen.”

The South Sudanese parliament speaker read out the formal declaration of independence for the Republic of South Sudan, the final step in a 2005 deal that followed decades of war between the north and south.

“We, the democratically elected representatives of the people, hereby declare Southern Sudan to be an independent and sovereign state,” speaker James Wani Igga said, splitting Africa’s largest country in two.

The declaration of independence affirmed the new state’s democratic and multi-ethnic and multi-confessional character, and its commitment to friendly relations with all countries “including the Republic of Sudan”, Mr Igga said.

The parliament speaker said that as a “strategic priority,” South Sudan would seek admission to the United Nations, the African Union, the east African bloc IGAD and other international bodies.

South Sudan’s Salva Kiir was sworn in as president.

Sudanese president Omar al-Bashir was guest of honour at the ceremony, and watched a parade by thousands of members of the former rebel army that he failed to defeat in 16 years command of the northern forces.

From early morning, revellers gathered at the venue, singing songs and carrying flags, amid tight security for the ceremony, which was attended by scores of African leaders and senior Western officials.

It was the largest international gathering ever seen in the war-damaged former garrison town on the White Nile that lacks even basic infrastructure, and army generals were asked to vacate their seats to make space for foreign dignitaries.

For decades, until a peace agreement was signed in 2005, southern rebels fought successive wars with the north, leaving the region in ruins, millions of people dead and a legacy of mutual mistrust.

Bashir was guest of honour, even though he is wanted by the International Criminal Court on charges of crimes against humanity and genocide in Darfur.

“We are here to welcome our brothers in the south in independence, and give a message to Bashir, that this is what happens when you oppress a people,” said Mohammed Jamous from Dafur.

UN chief Ban Ki-moon, another prominent guest at the ceremony, praised the “political courage” of the Sudanese government in accepting southern independence.

“I know secession is painful, emotionally and financially,” Ban said after meeting Foreign Minister Ali Karti in Khartoum before flying to Juba for the celebrations.

“While the people of north and south Sudan will soon live in different countries, their future will be closely linked.”

President Barack Obama granted US recognition of South Sudan as an independent state.

“After so much struggle by the people of South Sudan, the United States of America welcomes the birth of a new nation,” Mr Obama said in a statement issued by the White House.