US sends messages to Syria, Congress with diplomacy 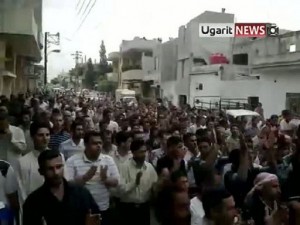 Greeted by demonstrators with roses and cheers, the envoy, Robert Ford, on Friday finished a two-day trip to the restive city of Hama aimed at driving home the message that the United States stands with those in the Syrian streets braving a brutal government crackdown.

The visit prompted fierce reaction from the Syrian regime and a renewed American warning that Assad was failing to stabilize his country by satisfying the democratic yearnings of his people.

Ford “had a chance to talk to lots of average citizens — these were shopkeepers, people out on the street, young men,” reported Victoria Nuland, the State Department spokeswoman. “When he got into the city, the car was immediately surrounded by friendly protesters who were putting flowers on the windshield, they were putting olive branches on the car, they were chanting ‘Down with the regime!’ It was quite a scene.”

So far, the U.S. government has refused to call for the end to Assad family’s four-decade dynasty. The government’s harsh repression of dissent has escalated the crisis with protesters increasingly calling for Assad’s ouster after 11 years full of promises of democratic reform but little change from the iron-fisted rule of his father.

The Obama administration has been trapped between looking indecisive or looking weak. It has grown increasingly disgusted with the violence in Syria that has now claimed the lives of some1,600 people and 350 members of security forces, but has been unable to muster sufficient international outrage to secure either a U.N. condemnation of Assad’s government or a unified global demand that he step down.

And the administration can’t press too hard by itself because the threat of military action would not be taken seriously while it is trying to wind down wars in neighboring Iraq and in Afghanistan, and struggling to justify its participation in an international coalition against Moammar Gadhafi in Libya.

The solution has been to balance stinging criticism of the Assad regime’s conduct with continued pleas for it to lead a democratic transition. But the measured approach has been difficult to project amid clamoring at home and in Syria for even tougher action.

Ford’s place in the U.S. strategy has been most ambiguous. Unable to secure a Senate vote on his nomination, the administration sent him to Damascus in January when Congress was out of session as a limited-term recess appointment. The post had been left unfilled for the five previous years in protest of alleged Syrian involvement in the assassination of a Lebanese politician who had criticized Syrian domination of his country.

Republican members of Congress have vociferously challenged Ford’s continued presence in the country, calling it an unwarranted reward to Assad’s often pro-Iran and anti-U.S. government stance, and untenable in light of recent violence against civilians. And the administration itself has struggled for weeks to point to any concrete accomplishments under Ford’s tenure.

Ford’s participation in a Syrian government-organized trip to the country’s north last month did not help. The State Department said at the time that Ford’s outing to the abandoned town of Jisr al-Shughour allowed him to “see for himself the results of the Syrian government’s brutality.” However, he mostly encountered deserted streets and buildings that, in and of themselves, wouldn’t prove the existence of a foreign conspiracy to destabilize Syria, as the government claims, or mass atrocities, as Western governments and human rights groups allege.

Ford also has been rebuffed in several attempts to speak directly with senior Syrian officials.

“Any continued presence of a U.S. ambassador will either be used by the regime for propaganda purposes or just plain ignored,” Rep. Ileana Ros-Lehtinen said last month. The Republican chairman of the House Foreign Affairs Committee, said Ford’s participation in the government trip “compromised U.S. credibility with freedom and pro-democracy advocates within Syria.”

U.S. officials nevertheless insist that Ford is serving a vital role in making American concerns known to the Syrian government and providing assessments to policymakers back in Washington. Beyond that, he is providing moral support to protesters, officials say.

“A U.S. ambassador in Syria can send a very potent signal to the Syrian people by a visit to a place where they are simply trying to express their free will to demonstrate peacefully,” Nuland said Friday. “By standing with them, he was representing not only U.S. values, but also the importance of having an ambassador and an embassy in Damascus at this time.”

Ford’s trip — undertaken independently this time — allowed him to see firsthand the lies of the Syrian regime, Nuland told reporters. While the government blames foreign instigators or armed gangs for unrest, Ford “witnessed average Syrians asking for change in their country,” she said.

In recent days, Hama residents have largely sealed off their city, setting up makeshift checkpoints with burning tires and concrete blocks to keep security forces away. The government seized on Ford’s visit to insist that foreign conspirators lay behind the unrest and called it proof the U.S. was inciting violence in the Arab nation. The U.S. is trying to “aggravate the situations which destabilize Syria,” the state-run news agency said Friday.

“The reason for his visit was to stand in solidarity with the right of the Syrian people to demonstrate peacefully,” she said, confirming that a video uplinked on YouTube was indeed of Ford’s car traveling through the Hama protesters.

Nuland also disputed the Syrian argument that Ford’s trip was unauthorized, explaining that the U.S. embassy informed the government of plans ahead of time. She noted that Syria’s ambassador to the United States can travel freely outside of Washington, and said Ford was allowed to pass through checkpoints run by the military and residents of Hama to reach the city Thursday.

“They really need to focus their attention on what their citizens have to say, rather than on spending their time picking at Ambassador Ford,” Nuland said, adding that it was “interesting that he had no difficulties with average Syrians in Hama — in fact, he was warmly welcomed.”

Ford left Hama during Friday prayers ahead of what are usually the week’s largest protests. He returned to Damascus safely Friday afternoon. He met France’s ambassador in Hama during his stay, but their trips to the city were coincidental and not planned in concert, Nuland said. AP